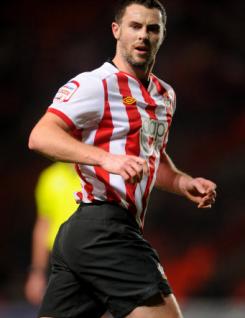 Frazer Richardson is an experienced right back who joined Southampton in the summer of 2010. He got off to a slow start with the Saints, dislocating his shoulder in his first training session after joining the squad on their pre-season visit to Switzerland. His first game for Saints? came in October 2010, a 3-1 win at Notts County, in which he impressing with his tackling and athleticism. Thereafter, whether in the starting line-up or coming off the bench, he made a solid contribution to the club?s successful promotion campaign, comfortably confirming his own estimation of his greatest asset: ?I?m a hard grafter.? Frazer is a product of the academy at Leeds and went on to spend seven years in the first team at Elland Road before his move south. He then spent the 2009-10 campaign with Charlton before arriving at St Mary?s.