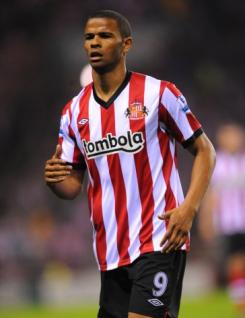 Fraizer Campbell is an exciting striker who signed for Sunderland from Manchester United in July 2009. A product of United's youth set-up, Fraizer scored prolifically at junior and reserve team levels, but it was not until he joined Hull City on loan in 2007-08 that he featured regularly in senior football. Fraizer spent the 2008-09 campaign on loan at Tottenham, but rarely featured in the starting line-up during his stay in North London. He went on to become Steve Bruce's first signing for Sunderland the following summer. Mainly deployed from the bench at first, Fraizer found a home on the right side of midfield and featured regularly in 2009-10. Unfortunately, his 2010-11 season got off to the worst possible start when he was ruled out for a lengthy spell after suffering a knee injury in the 1-0 victory over Manchester City in August 2010. He return to training in March, but suffered further problems and had still not recovered by the start of the 2011-12 season.