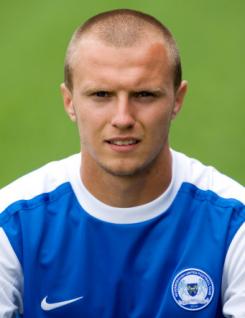 David Ball is a young striker who signed for Peterborough United in the January 2011 transfer window. David was previously at Manchester City being involved with the club from the age of eight. He went on to join the academy at City and appeared regularly in the U18s and reserves. David was called into the first-team squad early in 2009-10 when he was on the bench for the Manchester derby clash at Old Trafford and made a further appearance as an unused substitute before being sidelined by injury for several months. In July 2010 he was loaned to Swindon Town making his Football League debut on the opening day of 2010-11. David played regularly for Swindon and soon after his loan came to an end he made the permanent move to Peterborough appearing regularly for Posh in the second half of the season.