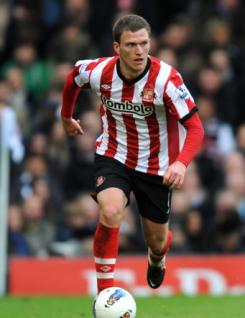 Craig Gardner is a young midfield player who signed for Birmingham City in January 2010. A central midfielder who has also played at right back, Craig is fearsome in the tackle and can shoot accurately from long range. He was a regular in the Blues? line-up during his stay, featuring either on the right of midfield or in a more central role and finished as the team?s leading scorer for 2010-11. Highlights came in the Carling Cup where his extra-time goal clinched victory over West Ham in the semi-finals and he then went on to secure a winners? medal in the competition as Birmingham gained their first major trophy since 1963. Craig developed through the ranks across the city with Aston Villa, making his senior debut against Everton on Boxing Day 2005. However, he chose to move on due to limited opportunities at Villa Park. Craig left St Andrew?s in the summer of 2011 following the Blues? relegation and signed for Sunderland.