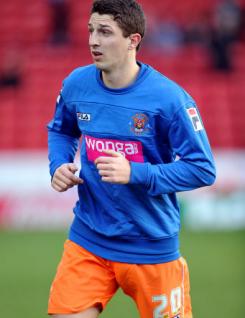 Craig Cathcart is a young centre back who signed for Blackpool in August 2010. A tall, imposing figure who is dominant in the air, he is elegant and composed on the ball and capable of turning defence into attack. He made his debut for the Seasiders against Wigan on the opening day of the 2010-11 season and held his place in the side until the closing weeks of the season. A highlight came when he scored in the home defeat to his former club, Manchester United, in January, while he was also selected as Blackpool?s Young Player of the Year. Craig is a product of the Old Trafford youth set-up, turning professional with the Reds in February 2006. However, although he appeared on the bench for United he never made it onto the pitch and his experience came in loan spells with Royal Antwerp, Plymouth and Watford. Craig made his senior debut for Northern Ireland against Slovenia in September 2010.