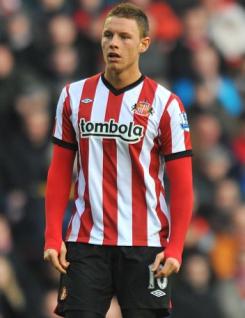 Connor Wickham is a promising striker who became the youngest player to appear in the Football League for Ipswich Town when he made his debut aged 16 years and 11 days. Connor, who is a product of the Ipswich Academy having moved from Reading's youth set-up as a schoolboy, scored England's winning goal in the UEFA U17 Championship final victory over Spain in the summer of 2010. He missed the start of 2010-11 with an ankle injury and did not hit form until the second half of the season. New manager Paul Jewell largely employed him on the left of a front three as he scored nine goals between January and May, including a superb solo effort against Sheffield United and his first senior hat-trick in the 6-0 win at Doncaster Rovers. In the summer he moved to Sunderland for a substantial fee.