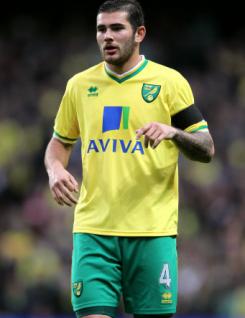 Bradley Johnson is a versatile left-sided player for Leeds United. A former trainee with Cambridge United, he made his Football League debut for the Us as a teenager before moving on to Northampton Town to continue his development. Bradley featured regularly for Leeds during 2010-11, a highlight coming with his superb strike in the FA Cup replay against Arsenal which was later voted as the Whites? Goal of the Season. Although sometimes used as a full back, he is best employed in a midfield role or as a winger. Bradley possesses a powerful shot from free kicks and has the knack of scoring useful goals with headers. He was out of contract in the summer of 2011 and left Elland Road to sign for Premier League new boys Norwich City.