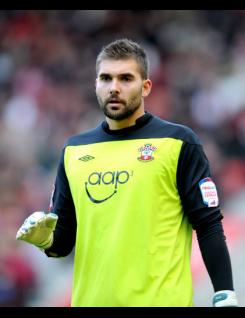 Bartosz Bialkowski is a strapping young goalkeeper who made his debut for Southampton in January 2006 whilst still a teenager. Since then he has mostly been second choice to Kelvin Davis at St Mary?s. An accomplished shot-stopper, Bartosz is impressive coming off his line, whether to gather high balls, or racing opposing forwards to long passes and has proved himself capable when called upon. Saints? manager Nigel Adkins was confident enough to hand him the gloves for the second, third and fourth round ties of the FA Cup during 2010-11; the latter match being at home to Manchester United. Saints lost 2-1, but as ever, Bartosz?s performance was admirable.