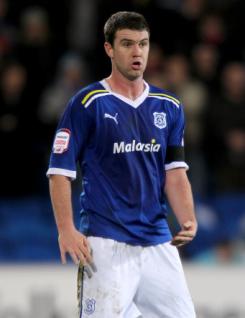 Anthony Gerrard is a big powerful centre back who signed for Cardiff City during the 2009 close season. Strong in the air, he made an immediate impact for the Bluebirds, establishing an excellent understanding in the heart of the defence alongside skipper Mark Hudson. However, he then fell out of favour and after a couple of early-season appearances in Carling Cup ties he went out to Hull City in a season-long loan arrangement for 2010-11. Anthony produced some fine performances for the Tigers during his stay, winning the Supporters? Player of the Year award before returning to Cardiff in the summer of 2011. He is a product of the Everton Academy and made over 150 appearances for Walsall before joining Cardiff.