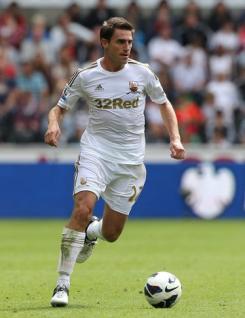 Angel Rangel is a right back who joined Swansea City from Segunda B club Terrassa in the summer of 2007. A solid defender, he is comfortable on the ball and very effective when moving down the flank and delivering crosses into the danger zone. Angel quickly established himself in the Swans? line-up after arriving at the Liberty Stadium and has gone on to become a key player in the side, making over 150 League appearances. He missed the opening weeks of the 2010-11 with an injury, but was back in the line-up in October and played an important role as the Swans fought their way to the Premier League with a play-off victory over Reading.