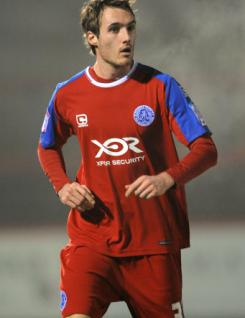 Alex Rodman is a striker who signed for Aldershot Town in January 2011. Alex had begun the 2010-11 season with Conference club Tamworth and had already reached a double-figure goal tally for the season before his move to the Shots. He made his Football League debut against Gillingham, when he scored, and he went on to net five goals from nine starts for the League Two club. Alex had previously spent time with a number of non-league clubs including Grantham Town, Lincoln United and Nuneaton Borough before joining Tamworth in the summer of 2008.