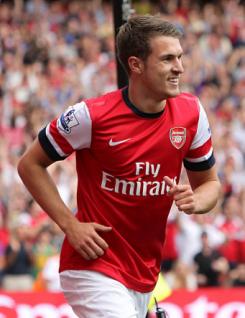 A young midfield player who signed for Arsenal in the summer of 2008 after inspiring Cardiff City to reach the FA Cup final at the age of 17.&nbsp; He is a neat, skilful central midfielder with a good range of passing skills. After just a handful of first-team games for the Bluebirds, Arsenal won the race to bring Aaron to London.&nbsp; He gradually established himself as a first-team player before suffering a broken leg at Stoke in February 2010. It nine months before he was back in action and after completing his rehabilitation with loan spells at Nottingham Forest and Cardiff he eventually returned for the Gunners in March 2011. He was back to his best in 2011-12 when he featured regularly in the line-up throughout the campaign, forging an effective midfield partnership with new signing Mikel Arteta.&nbsp; Aaron made his international debut for Wales at the age of 17, becoming their youngest-ever player, and has since gone on to captain the side. He has now won over 20 caps and also featured for the Great Britain team at the 2012 London Olympic Games.