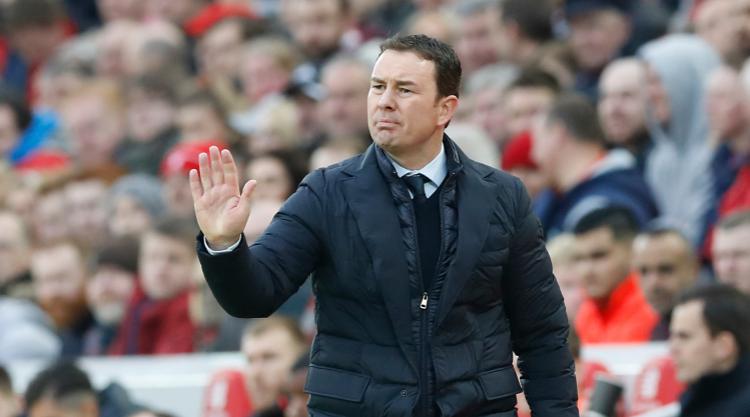 The Sky Bet League Two high-fliers became only the fifth side in the last year to keep a clean sheet at the home of the free-scoring Reds.

Jurgen Klopp will point to the fact he named the club's youngest side in their history - with an average age of 21 years and 296 days - as a mitigating factor, but there was no doubt about the resilience and determination of the visitors.

"It is probably one of the best defensive performances Anfield has seen," said Adams.

"We limited Liverpool to not many (opportunities). We dealt with them well and the players have worked extremely hard.

"It would be naive as a manager to come to Anfield and think you can go at top-class players.

"We are a League Two club, they are a Premier League club with players at international level.

"We allowed them time but didn't allow them space.

"This was about a team performance. We had 13 players and they all deserve a huge amount of credit."

Liverpool dominated possession - after 35 minutes it was as high as 84 per cent - but did not do enough to trouble goalkeeper Luke McCormick as Klopp's youngsters found their way blocked by a green wall of players.

"They could have had 90 per cent if they wanted, the game plan was to not let them score," added Adams, who is already looking forward to the replay at Home Park.

Asked what Liverpool could expect in the return fixture he said: "Welcome to the real world."

Klopp defended his decision to make 10 changes after witnessing his side put in a lacklustre performance in the 2-2 draw at Sunderland on Tuesday following a busy festive period.

"I don't think the line-up was a mistake," he said.

"I am responsible if you want to see it in a bad way. I always choose line-ups to win the game.

"We didn't think about the age. They are important players in our squad."

Nevertheless Klopp was not too happy with the performance but attributed no blame to their opponents for making it a dull game.

"In the first half we lost patience too early: crossing at the wrong moment, making the wrong pass.

"We had the ball all the time. It was boring, not the most exciting game."

A replay is the last thing Klopp wanted in a month which contains a two-legged EFL Cup semi-final against Southampton as well as a trip to Manchester United and the visit of league leaders Chelsea.

Asked about the prospect of a long midweek trip to Devon, the German responded: "Yippee. I don't know if at home they can play the same defensive style. We are looking forward to it."