The State of Sheffield United: An Overview of the Club's Prospects as Football Takes a Break

While playing another game of FIFA may be a short-term fix for football fans, it's difficult not to clamour for the real game coming back again.

The break from football does conversely give fans a chance to reflect and judge how the season has gone for their favourite team.

So with that, let's look at it all; how it's gone, how it could go when it all starts up again, and what the long-term future might hold for Sheffield United. Tipped to go down by a fair few, Sheffield United have defied all doubters who thought the idea of centre-backs crossing from the byline as ridiculous.

Of late, they have been in excellent form, having won three of their last four games. The Blades have only lost twice in 2020, and considering it was to both Liverpool and ​Manchester City, manager Chris Wilder won't lose sleep over those defeats. A point at Arsenal was also impressive, and they have shown they can consistently avoid sloppy defeats to struggling sides, with wins over West Ham and ​Bournemouth proving so.

Their latest 1-1 draw with Brighton means they sit in seventh place, only five points short of the top four. With a mixed run of games to come, it's still unclear if Wilder's team will manage to achieve European football for next season - provided those games get played at all. They also remain in the FA Cup, with a home quarter-final against the ​Gunners - a team they've already beaten this season.

Besides ​Liverpool, the Blades have a strong case to be the Premier League's team of the season. 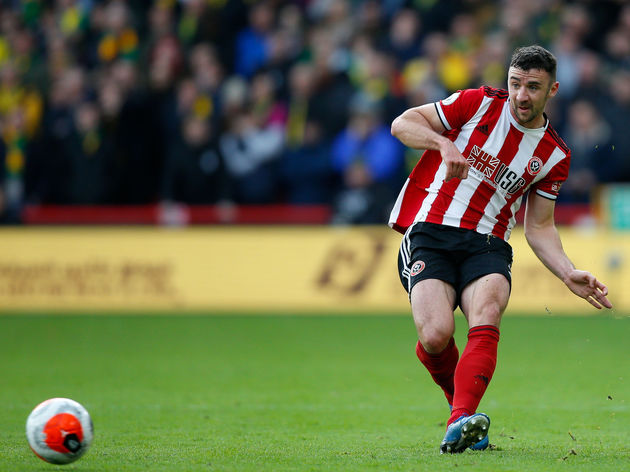 The Blades only have one injury at the moment, but should have everyone fit for late April - when the season is dated to resume. Left-back Enda Stevens have struggled with a calf issue, but should have enough recovery time to be ready by then. The Ireland international has impressed many with his defensive work and attacking runs, and will be key for the team in their remaining fixtures. Despite the Premier League ​setting 30 April as the date for resuming the season, it still appears unlikely we'll see teams in action by then. But if and when it does recommence, ​Sheffield United have ten league games to play, due to having a prior game in hand, as well as their FA Cup quarter-final.

Their remaining league games are listed below. We'll throw in a result prediction and a projection on what position they'll finish in for fun, too.

The Blades will likely remain in the top seven, and put themselves with a good chance of playing in the Europa League next season - whenever that gets played.

Bramall Lane has become a home fortress for them, and they should beat both ​Wolves and Spurs, while holding Chelsea and Everton to draws as well. Wilder has made his team difficult to beat on the road too, and they will likely take a point at both Newcastle and ​Southampton as well.

As for the FA Cup, it's hard to make any predictions, especially if the tournament is reformatted or potentially cancelled. Regardless, they'll be confident of beating Arsenal again, but will likely fall short at the next stage.

If all goes to plan, Sheffield United will play European football next season and establish themselves as a top-ten side. Five Sheffield United players will be out of contract by 30 June - with John 'Lord' Lundstram the standout of the list.

The Fantasy Premier League hero has been a revelation with his all-action displays and late attacking runs to score goals. His signature should be a shoo in for Wilder, who has ​already suggested an extension will be granted for the midfielder.

The quartet who also have expiring deals includes defenders Kieron Freeman and Phil Jagielka, as well as Jack Rodwell and Leon Clarke. Clarke will likely leave for more opportunities, and it's unlikely Rodwell and Freeman will stay either. Jagielka could however be given another year, with his top-flight experience key for the team.

It's clear the Blades don't want Dean Henderson to go when the season ends. The on-loan goalkeeper has been terrific for them and ​it's likely he will remain in south Yorkshire for the following season.

Should parent club ​Man Utd decide otherwise, they will look to sign a replacement - with Trabzonspor's Uğurcan Çakir high on their list of possible signings. The 23-year-old has impressed many with his displays and the Blades ​reportedly had their offer for him denied by the Süper Lig club in January.

Çakir's on-loan teammate Alexander Sorloth has also been ​linked with a move to Bramall Lane. The Crystal Palace striker could add extra firepower, with joint top-scorers Lys Mousset and John Fleck scoring only five goals each.

Wilder's side has additionally shown interest in ​Leeds' Kalvin Phillips, and could strengthen their midfield with an audacious move for the 24-year-old - given that he plays for their Yorkshire rivals. Can Sheffield United back up their superb campaign with a better one next season?

That's the main question - and there will be extra pressure on the south Yorkshire club to attain similar results to stay in the top ten, without taking major steps back from the huge progress they've made this season.

In order to go further, Wilder will likely need to invest in the squad to improve their depth and quality. Yet he will also be wary of trying not to make too many changes, so that the strong chemistry shared by the current group of players will not be disrupted.

A possible Europa League campaign will take a toll on the team's resources too - we've seen many struggle in the league while trying to juggle those Thursday night away games in faraway Kazakhstan, or Russia, to name a few possible destinations.