It's remarkable how one man can change the course of history. However, when Aylesbury United coach, ​Steve Greenhalf suggested that Emmerson Orlando Boyce might want to try switching from playing striker to defender he set in motion a series of events that otherwise would not have conceivably taken place. Wigan Athletic would be a million pounds better off, for one.

Yet Greenhalf, who would have done well to offer similar advice to the likes of Jozy Altidore, insisted to a reluctant young Boyce that the only way he could ever become a professional footballer would be if he stopped trying to score goals. Lo and behold, just a few years later, Emmie found himself running out onto the pitch at Kenilworth Road as a right back for what would be the first of 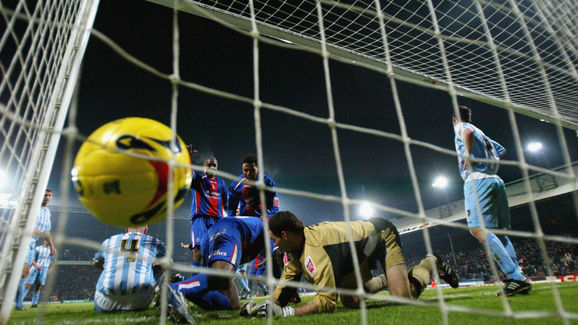 (Above: Despite not playing as a striker, Boyce continued to score, in this instance in his own net)

Following his debut, Boycey got off to a good start with the Bedfordshire club, earning the prestigious 'Internet Player of the Season' award, with manager Ricky Hill refusing to hold back on his own praise of the defender, stating he believed the 22-year old "deserved a call up to the England under-21s squad." Meanwhile, despite strict orders not to

️ "The #PLKicks scheme has developed my confidence and I hope my story inspires other youngsters to work hard and achieve great things."

 Oliver Carrick was named the club's #KicksHero at Saturday night's Charity Ball at the @DWStadium. (Above: Boyce trying to decide if he'd rather have won the Luton Town Internet Player of the Season award or the 2013 FA Cup)

Realising that his best days were probably behind him, Boycey packed his stuff and left Wigan after nine years with the club, heading to Blackpool for a go on the rides and a last chance at fulfilling his dream of playing striker.

Yet after a few goes on the teacups and a fourth relegation in as many clubs, the English-Barbadian had had enough, finally hanging up his boots at the tender old age of 36, having made 544 appearances over 18 years.

Where is he now?

What did he say?

"Everyone knows what an amazing player Jermaine Pennant is"