Mauricio Pochettino has insisted his side were fully deserving of their win after Christian Eriksen's late strike earned his side a 1-0 victory over Burnley at Wembley Stadium.

Tottenham headed into the game coming off the back of an impressive 1-1 draw against Barcelona in the Champions League in Tuesday night, which in turn saw them through to the knockout stages. Unfortunately for the fans in attendance their side struggled to get going against the Clarets, managing just one shot on target in the first half and failing to create any clear cut opportunities. 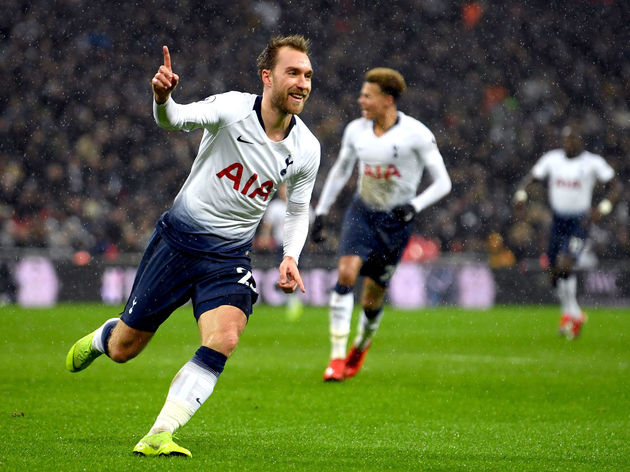 The second half proved to follow a similar pattern to that of the first with Joe Hart having to make just two notable saves in regular time, however it was a substitute who made the difference for the home side. Having been played through on goal by Harry Kane, ​Eriksen coolly slotted beyond Hart in the 91st minute to snatch a ​1-0 win for his side.

The win was Pochettino's 100th as manager of ​Tottenham and speaking to ​Sky Sports after the game, he insisted his side fully deserved it.

"We fully deserved the victory. Sometimes you don't get the reward, but we did everything to win. "If you work hard, have patience, and try and try, you get the reward. I'm so happy for the three very important points after qualifying in the Champions League. It's a massive week for us. Football is about 90 plus injury time, and if you believe and keep pushing, you can be rewarded. These type of victories are so important."

Whilst there were some questionable performances, one performance which stood out was that of 18-year-old debutant Oliver Skipp who managed 75 minutes in what was an impressive debut for Spurs. Pochettino went on to praise the midfielder and insisted how proud he was to introduce another product of Tottenham's youth academy into the first team set up.

He added: "He was fantastic. He plays so well and was very comfortable on the pitch. He showed what he has been showing in the past few months on the training ground.

"He fully deserved the debut and I'm very happy for him, his family, for everyone, because it's one more to add to this squad. Another young player through the academy, which is so important for all the staff."

Fighting until the final whistle. 👊

Thanks for your support today. 👏#COYS pic.twitter.com/pHTQtUqkWD

Whilst his side were able to take away all three points against ​Burnley, Pochettino will be hoping for a much improved performance when his side take on Arsenal in the Carabao Cup quarter final on Wednesday night before travelling to Goodison Park to face Everton in the Premier League on Sunday afternoon.