7 of the Best Moments From Bastian Schweinsteiger's Illustrious Career

Following his retirement announcement, we've taken a look back at some of 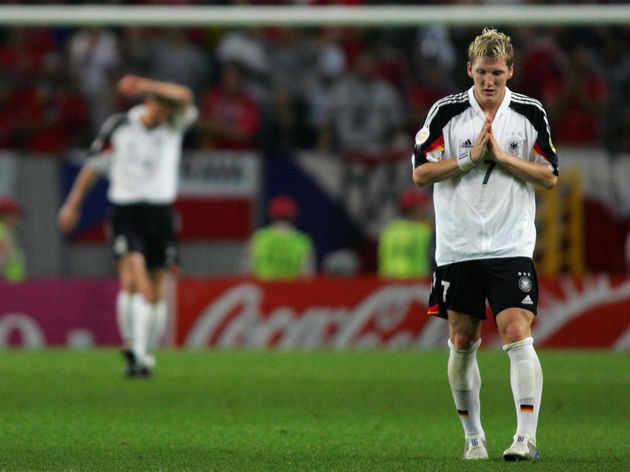 While many have often questioned the importance of this match, Schweinsteiger used this as an opportunity to continue building a reputation for himself. From this match on, he was regarded as the long-range specialist.

The first: a fierce shot that flew in from 25 yards. He then fired in a free-kick that was deflected into the Portugal goal, before he cut in to send a skidding shot into the corner of the net. A day to remember. Bastian was one of the greatest midfield enforcers, but it's easy to forget that he actually began his career as a right-sided midfielder.

Both managers for club and country were quick to praise the midfielder's versatility in his early years, but it wasn't until Louis van Gaal came in that Schweinsteiger cemented his role as the deeper central midfield player.

Looking back on this change, the player described it as 'very important' in his development. He believed that this change allowed him to dictate the game without needing to depend on others.

Winning the Treble With Bayern Munich One thing everyone knows about Bayern Munich is that they hate losing. In fact, they were so frustrated about not winning the treble in 2011/12 that they ended up claiming all three trophies the following season, and in some fashion.

In the league, Schweinsteiger chipped in with seven goals and five assists to help him team claim the title, finishing a whopping 25 points ahead of defending champions ​Borussia Dortmund. And then there was the Champions League. The Germans breezed past Barcelona 7-0 on aggregate, before defeating Dortmund in the final. Schweinsteiger was later named the German Footballer of the Year.

That season, manager Jupp Heynckes described the player perfectly, claiming that he was the heart and soul of the team. The player that plays for everyone, not for himself. Blood, sweat and tears. Nothing sums up Schweinsteiger quite like the scenes we were all blessed to see at the 2014 World Cup. He was bruised, battered and bleeding, yet he was still somehow standing.

Germany ended up defeating Argentina 1-0, with Schweinsteiger making more tackles than any midfielder on the pitch. He was also nursing a knee problem in the build-up to the tournament, but he never once let it affect him.

The Germans, of course, produced a ruthless display en route to the final, demolishing hosts Brazil 7-1.

The legend returns! Bastian Schweinsteiger is back in Munich for his Bayern testimonial  pic.twitter.com/uaAxod2ICu

He scored for Bayern and was presented with his home state's Order of Merit. After the match, he told the home crowd that he was one of them, and that he always will be.