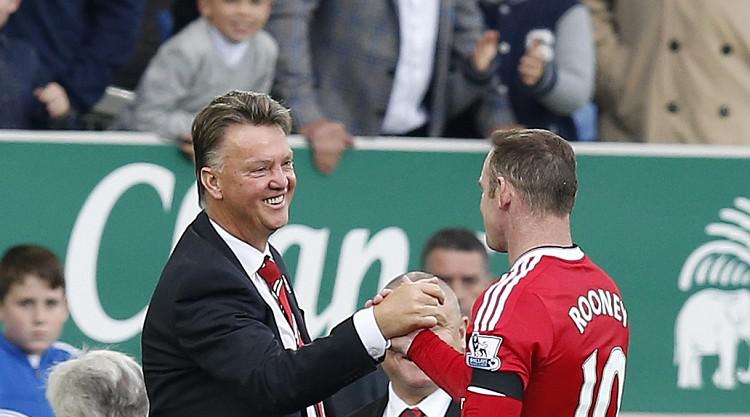 Louis van Gaal has challenged Manchester United to prove they are genuine title contenders by beating their bitter local rivals City next weekend.

United bounced back from their humbling 3-0 defeat to Arsenal by beating Everton by the same scoreline on Saturday.

Wayne Rooney scored his first goal at Goodison Park for eight years after Morgan Schneiderlin and Ander Herrera had given Van Gaal's team a two-goal cushion.

United will move to the top of the Barclays Premier League if Arsenal drop points against Everton and United beat leaders City in the derby at Old Trafford.

Van Gaal believes victory over City would silence the doubters who claim his side are not capable of topping the table come May.

"I am very happy with the response of my players and I am very proud of the performance," the United manager said.

"I think it was an excellent performance and maybe it is the start of many, many victories.

"We have to be more consistent, so next week when we win against Manchester City then we can say, 'OK, now we think maybe about title aspirations'."

The news of Howard Kendall's death cast a dark cloud over Goodison and the subdued atmosphere allowed United to start comfortably.

Eighteen minutes had passed when Schneiderlin steered the ball into the far corner after being left unmarked at a corner.

More sloppy marking allowed Herrera to nod in Marcos Rojo's deep cross four minutes later and after the break Rooney sealed the win, shooting past Tim Howard at his near post after beating the offside trip.

The win was just what Van Gaal needed after his chastening trip to the Emirates Stadium before the international break.

"I am very proud of the players, it's a fantastic performance.

"I think after the defeat to Arsenal we needed that also so therefore it's very important that we won."

Van Gaal underlined his faith in Rooney by allowing the captain to lead the line at Goodison, despite a record of two goals in his previous 10 appearances at the home of his former club.

The 29-year-old has come in for criticism for his poor scoring record this season, but took his second league goal of the campaign well, clipping the ball over Howard after he went to ground early.

Van Gaal now wants to see his striker find the goal on a more regular basis.

"It is fantastic and I am very happy that he has scored his first goal against Everton since 2007. Maybe it is the start for many, many goals," the former Bayern Munich coach said.

Van Gaal's opposite number Roberto Martinez denied his players were affected by the "really sad" news of Kendall's death before kick-off.

The Spaniard admitted his team never looked like recovering from Schneiderlin's maiden strike for United.

"We were affected by the first goal too much," the Everton manager said.

"That stopped us from being brighter. We were frustrated by that.

"It wasn't our day. We have to get back to preparing the game well and react at the weekend."

On the death of Kendall, the club's greatest ever manager, Martinez said: "It was a shock, really sad news.

"It was a very emotional moment when we found out but we reacted in the right way, celebrating his career and what he gave to Everton. He will always be an inspiration to any manager of this football club."