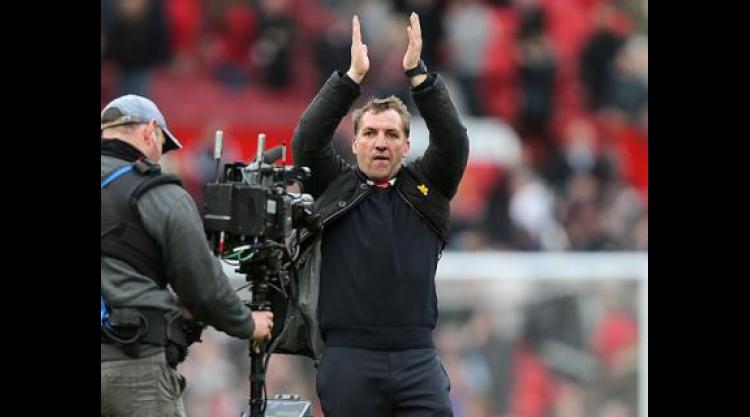 Liverpool manager Brendan Rodgers insists the pressure of the title race will not diminish his side's ability to attack and dominate opponents.

The Reds are on a 10-match unbeaten streak in the league in which they have taken 26 points from a possible 30 and amassed a goal difference of +20 for that period.

They are the Premier League's top scorers with 76 goals and in Luis Suarez (25) and Daniel Sturridge (18) they possess the two leading strikers.

Their aggressive intent was evident in last weekend's 3-0 win at Old Trafford which closed the gap on leaders Chelsea to four points with a match in hand.

Momentum is behind the team and Rodgers stressed just because they were in contention for their first title in 24 years it would not have an affect on the way they played.

"For us there is no change. There is no pressure. The expectancy here is to win every game," he said.

"I've always said the second half of the season suits us because of the nature of how we play.

"We have a game based on dominance of the ball and dangerous possession and that has only increased in the second half of the season and it certainly won't decrease.

"We are one of the world's biggest clubs so when we play we play with dominance.

"It is an ongoing part of our methodology. Our work without the ball to press and suffocate our opponents and with the ball to show charisma and arrogance.

"It highlights the confidence within the team and to do so in such a big arena (last weekend) was great.

"There is no fear with young players and it is my job to remove any fear out of the game and let them go and play to a tactical plan and go and express themselves.

"People of my generation and before that have known Liverpool as a world-renowned football club and I think it is great for football - not just in this country but worldwide - we are challenging for trophies.

"This is one of the most iconic football clubs in the world and it is my job, along with the staff here, to push it up into those echelons of the game where it belongs."

While Liverpool's win at Old Trafford resonated around the Premier League and beyond Rodgers insists he and his players are not getting ahead of themselves.

He feels that is the best way to deal with the challenge of staying in the race for top spot.

"We had a wonderful result and performance at Old Trafford but there hasn't been any talk about winning the title," added the Reds boss.

"We are relaxed but focused. We don't forecast or predict results in any games.

"It can become pressure when you look too far ahead, we are looking to Cardiff (on Saturday) - that has been our world this week.

"The pressure will be for other clubs but when you play for Liverpool there is pressure every game."

Rodgers' mantra for the last couple of months is to focus on the immediate future and not get distracted by what may lie ahead, despite optimism being at an all-time high in the last few years.

"We will speak about the run-in when it has finished at the end of the season," said the Northern Irishman.

"For me it has always been about the next game, and that might sound boring but it is the reality of where we are at.

"There is no point worrying about Sunderland next Wednesday if we've got a massive game on Saturday at 3pm.

"It is fairly straightforward. I think it is great for the supporters to dream and I think they have great pride in what they are seeing.

"We have had a very good season, are second in the league, and our level of play is improving all the time but we haven't done anything yet."