Juventus cruise past Crotone to keep pace with Serie A pacesetters 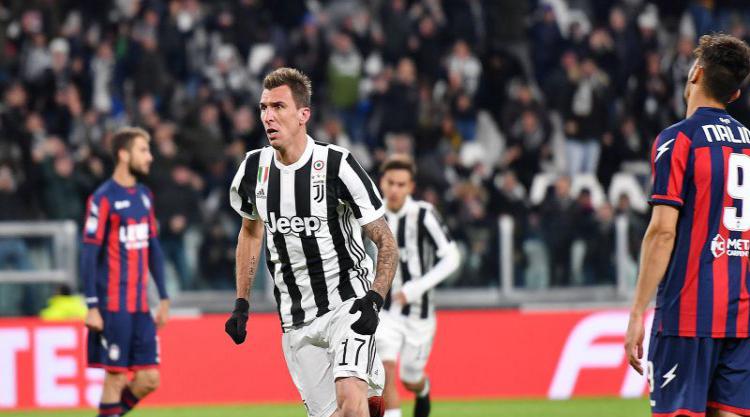 Juventus bounced back to winning ways with a comfortable home victory while Napoli returned to the top of Serie A on Sunday.

Second-half goals from Mario Mandzukic, Mattia De Sciglio and Medhi Benatia saw the reigning champions recover from their setback at Sampdoria last weekend with a 3-0 win over Crotone.

Juve could not find a way past the visitors’ defence in the first half but Croatian forward Mandzukic finally broke the deadlock seven minutes after the break when he headed in Andrea Barzagli’s cross.

De Sciglio made his mark two minutes after coming on, arrowing in his first Serie A goal from the edge of the area, before fellow sub Miralem Pjanic crossed for Benatia to tap in the third with 19 minutes left.

Victory leaves Massimiliano Allegri’s men in third place, four points behind leaders Napoli, who they travel to on Friday.

Maurizio Sarri’s men had earlier reclaimed top spot with a 1-0 win over Udinese.

Inter Milan had moved a point ahead after Saturday’s 3-1 win over Cagliari but Napoli needed a solitary Jorginho goal to make an instant return to the summit.

The only goal came in the 33rd minute when a bewildered Gabriele Angella brought down Christian Maggio in the box and though Jorginho’s penalty was saved by Simone Scuffet, the midfielder tucked away the loose ball.

A penalty also cost fourth-placed Roma as they drew 1-1 at Genoa.

The Giallorossi led through Stephan El Shaarawy’s goal but while defending a corner 10 minutes later, Daniele De Rossi was sent off for foolishly slapping Gianluca Lapadula, who scored the resulting spot-kick.

Lazio missed the chance to move level on points with their city rivals as Khouma Babacar converted a stoppage-time penalty to snatch a 1-1 draw for Fiorentina at the Stadio Olimpico.

In the day’s other game, AC Milan were held to a 0-0 draw at San Siro by Torino.