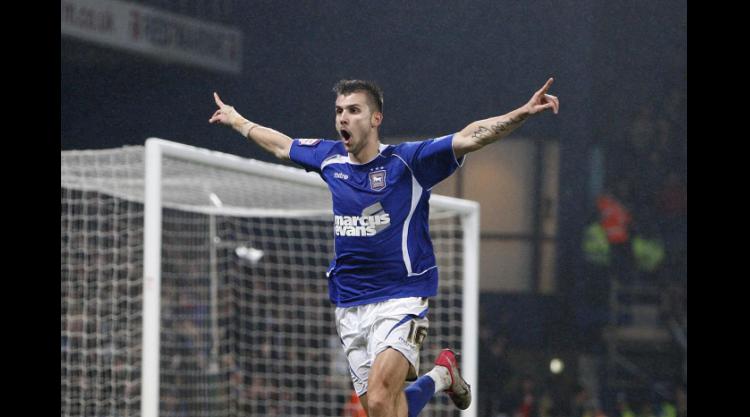 The Tractors boys had been thrashed 7-0 at Chelsea in their FA Cup third-round tie on Saturday after axing Roy Keane.

However, there was to be no repeat as under the guidance of Ian McParland, with new boss Paul Jewell watching from the stands, a second-half strike from Priskin gave the Suffolk side reward for their endeavours and a slender advantage which to defend at the Emirates Stadium in a fortnight's time.

Arsenal had only just scraped a 1-1 draw in their home FA Cup clash against Leeds on Saturday through a last-minute penalty from captain Cesc Fabregas.

Arsene Wenger had warned against a repeat performance, and he looked to have taken no chances by naming a strong XI which included Spain World Cup winner Fabregas as well as England internationals Theo Walcott and Jack Wilshere.

However, once more the Barclays Premier League title challengers failed to hit top gear and were fortunate not to lose by a bigger margin.

Both teams made positive starts, with half-chances for Walcott and Fabregas, while Ipswich forward Connor Wickham, a reported Arsenal target, was also lively on a slick playing surface.

After 14 minutes, the hosts broke quickly as Priskin received the ball up on the left before cutting inside and unleashing a 20-yard curling effort which flashed just wide.

Arsenal continued to probe, with Walcott drilling his shot across the six-yard box.

Despite all of their positive build-up, just like on Saturday, the Premier League side lacked a cutting edge in the final third.

Slowly Ipswich worked their way back into the tie, forcing a couple of corners to give the capacity Suffolk crowd a lift.

Wojciech Szczesny flapped at a ball into the six-yard box as Gareth McAuley headed over, before Ipswich captain David Norris was inches away from connecting with Wickham's left-wing cross.

The home fans were on their feet when Priskin netted an acrobatic overhead kick after 42 minutes, but celebrations were immediately cut short by an offside flag.

Walcott skipped into the area at the start of the second half, before tripping over the ball - which drew ironic cheers from the home fans after the Arsenal forward had admitted to diving against Leeds.

Fabregas chipped a pass through to Arshavin down the left, but the diminutive Russian could not control his shot, firing an angled volley high and wide.

Ipswich, though, refused to lay down and continued to take the game to their illustrious visitors, Wickham again catching the eye with some powerful runs.

Mark Kennedy robbed Fabregas and, with Szczesny off his line, tried an audacious 35-yard lob, but the 6ft 5ins Pole recovered quickly to make a comfortable save.

Emmanuel Eboue was then caught in possession by Priskin, but recovered to block the Ipswich striker's goalbound shot.

Just after the hour, somehow Arsenal survived when a long ball caught out Koscielny.

For a moment Priskin was clean through on goal, however Johan Djourou made a brilliant interception to knock the ball over his own crossbar from inside the six-yard box.

As the rain lashed down on Portman Road, Arsenal continued to give the ball away cheaply.

Gibbs cut inside from the left and fired a shot wide from 20 yards, before, after 67 minutes, Wenger made a change when Alex Song replaced Wilshere and Marouane Chamakh came on for the ineffective Nicklas Bendtner.

Arsenal immediately looked to raise the tempo, Fulop making a smart save at his near post after Walcott had been played in by Fabregas.

The Arsenal skipper then put Gibbs' cross over from four yards out off his thigh after Chamakh had just failed to connect.

Ipswich finally made the breakthrough after 78 minutes when Colin Healy's through-ball split the Arsenal centre-backs and Priskin got ahead of Djourou to calmly slot into the bottom right corner.

The Gunners pressed forward, with Fulop coming out to block Walcott before Szczesny saved from Carlos Edwards at his near post and the Tractor Boys closed out for a famous victory.

- Ipswich Town 1-0 Arsenal: As it happened