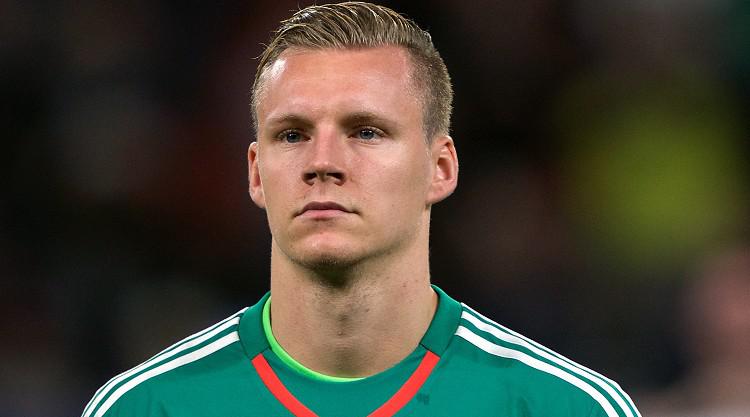 Goalkeeper Bernd Leno has been given his first call-up to the Germany national team as coach Joachim Low sets his sights on two wins for Euro 2016 qualification.

Germany are away to the Republic of Ireland on Thursday and round off their qualification campaign against Georgia three days later.

Two wins would see Germany qualify for a place in France next summer and Low is expecting no less from the squad he named on Friday.

He said: "We want to bring our qualifying campaign to a serious and focused conclusion.

"Our aim is to beat both Ireland and Georgia to qualify for France as group winners.

"I have the utmost faith in the players, who fulfilled their duties excellently in September.

"These players are getting regular games and challenges for their clubs on a domestic and European level and they are all in a good rhythm.

"That's a good scenario for our decisive group games."

Low has therefore named the same squad which beat both Poland and Scotland last month to take the world champions to within touching distance of Euro 2016 qualification, with just one addition - Leno.

"Like I've already said, we have plenty of candidates behind Manuel Neuer that we are keeping an eye on," said Germany's goalkeeper coach Andreas Kopke.

"We're in a comfortable situation and there is no necessity to make any final decisions now.

"I've told this to Ron-Robert Zieler. We know what he can do and what he gives us.

"Bernd Leno has earned this call-up thanks to his constantly good performances for Bayer Leverkusen and just like Marc-Andre ter Stegen, we've had our eyes on him for a while.

"Both took part in the UEFA European Under-21 Championship and now we want them both involved here and to work with them."

Germany lead Group D with 19 points, two more than second-placed Poland and four more than the third-placed Republic of Ireland.

The top two qualify automatically for Euro 2016 while the nation who finishes third will have a direct ticket to France by being the best third-placed side from all the groups, or else they will have to play in a play-off for qualification in November.

Germany therefore need just a point against Ireland to book their ticket, but Low has warned that it is not something his team can just take for granted.

"We already knew how dangerous the Irish were even before we met them in the reverse fixture," Low said.

"Playing against Ireland in Dublin is not something you can take lightly. We can expect an amazing atmosphere with the fans getting right behind their Irish team and urging them on to the very last minute.

"We're going to have to keep our cool and also be patient if we want to survive there, but if we call up our potential and focus on our qualities, then we will create chances.

"I'm looking forward to the game and the atmosphere in Dublin."