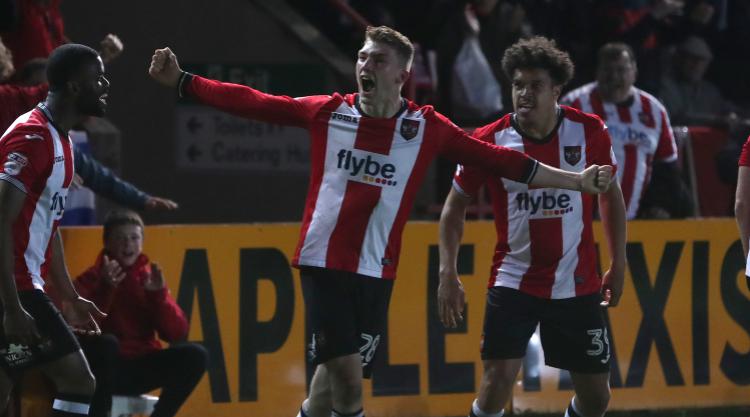 Exeter booked their place in the League Two play-off final with a dramatic winning goal deep into stoppage time against Carlisle.

The Cumbrians scored a 90th-minute equaliser to make it 2-2 on the night and 5-5 on aggregate.

But Exeter's Jack Stacey - who spent time on loan at Carlisle last season - fired a sensational shot into the top corner from 25 yards to make the final score 3-2 and send City back to Wembley, nine years to the day that they regained their Football League status at the national stadium.

The Grecians, as they did in Sunday's first leg at Brunton Park, went in front with their first effort at goal on 10 minutes.

It was all started by Ryan Harley, who took the ball in midfield and pinged a fine cross-field pass to David Wheeler. He got the better of Tom Miller and laid the ball back to Ollie Watkins, whose scuffed shot took a deflection and somehow found its way past Mark Gillespie in the Carlisle goal.

The Cumbrians responded well to that setback, with Jamie Proctor turning well and firing high from 25 yards, while Exeter winger Lee Holmes shot straight at Gillespie from the edge of the penalty box.

Gradually, Carlisle began to get on top with Exeter having to deal with numerous crosses and long throws into their penalty box. Jamie Devitt was off target before seeing another shot blocked and Nicky Adams skied high with Carlisle's best chance from Luke Joyce's deep cross.

Carlisle started a pulsating second half with real intent and almost equalised inside 14 seconds, but Adams' angled shot was well saved by Bobby Olejnik.

Watkins almost made it 2-0 to Exeter shortly past the hour mark when he showed great strength before turning and lashing a shot goalwards, but Gillespie got down brilliantly well to turn the ball behind and substitute Joel Grant also missed a great chance after a brilliant solo run.

The Cumbrians responded with Danny Grainger heading over from a corner, but with 10 minutes remaining Watkins seemed to have put the game beyond doubt.

Wheeler was again the architect, driving at the heart of the Carlisle defence and feeding the ball to Watkins, who got the ball onto his left foot and curled a beauty into the top corner from 15 yards.

But Carlisle hit back within two minutes as Exeter struggled to clear a corner and Jason Kennedy scrambled the ball over the line to give the Cumbrians hope. It was a chance they took as well.

In the final minute, a deep cross from Adams found John O'Sullivan and he steered a fine header into the bottom corner.

However, with almost the last kick of the match, Stacey sent Exeter to Wembley when he cut in from the right and fired a stunning shot into the top corner to send St James' Park wild with delight.