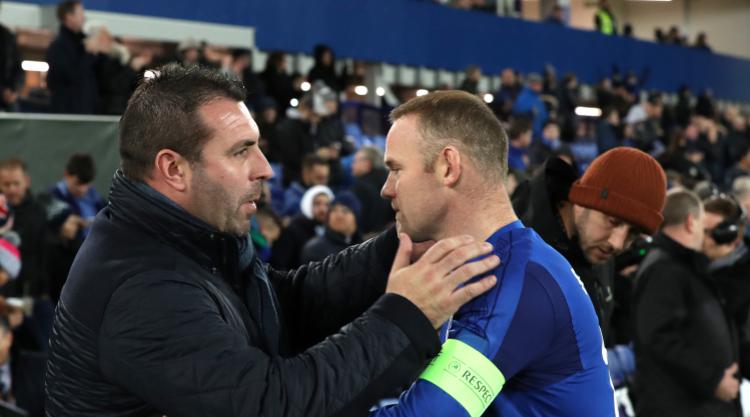 Wayne Rooney felt he had never scored a better goal than the incredible strike that completed his hat-trick in Everton's 4-0 thrashing of West Ham.

With incoming boss Sam Allardyce watching on from the stands at Goodison Park, Rooney scored from inside his own half in the 66th minute as he met Joe Hart's clearance inside the centre circle and sent the ball straight in.

Asked if he had ever netted a goal better than that, the 32-year-old told BT Sport: "I don't think so.

"It's one of, if not, the best goal I've scored. I hit it as well as I've ever kicked a football. To make it my first hat-trick for Everton, I'm delighted."

Captain for the night Rooney's first goal came in the 18th minute as he headed in on the follow-up after his penalty was saved by Hart, and he slotted home his second 10 minutes later.

The win, which moved Everton up from 17th to 13th in the Premier League, was only their second in eight matches since David Unsworth stepped up from the under-23s to take caretaker charge following the sacking of Ronald Koeman.

Allardyce, sat alongside Everton's major shareholder Farhad Moshiri and chairman Bill Kenwright at the game, will surely have taken great encouragement from what he saw hours after the club had announced he was to finalise terms on becoming their new manager.

Rooney said of Allardyce: "Of course he'll be pleased, but for us as a team, as a club, it was important for us to show some pride. As David Unsworth said, we've been hurting."

He added: "We've got to give thanks to David Unsworth. He's stepped in at a difficult time for the football club, he's a true Everton person.

"I'm delighted for him we've got this victory because it's an important win for the club but also for David Unsworth.''

Unsworth hailed Rooney's "wonder goal" and said the former England captain was "probably the only guy on the pitch" who could score such an effort.

And regarding Allardyce, he said: "I had 10 minutes with him this afternoon at Finch Farm. He came in with (Everton's director of football) Steve Walsh and had a look around.

"I'm sure I'll have a more in-depth conversation with him in the next few days.

"I'm going to have a couple of days off and resume my role with the under-23s. That's important to me."

He added: "The board have made a decision and like any manager he needs to be afforded time and patience and given the chance and the backing from the whole football club. He certainly has my backing.