Banks support invaluable for Butland ahead of World Cup year 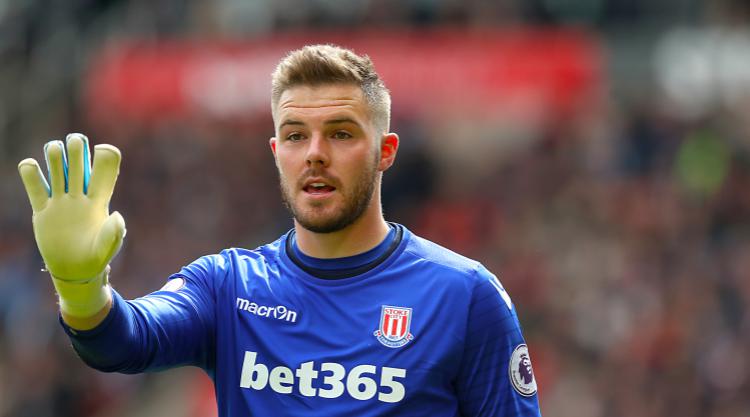 Jack Butland hopes he is back on track for the World Cup - with a little bit of help from Gordon Banks.

The Stoke goalkeeper made a surprise return from a broken finger suffered on England duty last month for Saturday's 2-1 victory over Swansea.

The injury prevented Butland from playing in England's friendly against Brazil and furthering his claim to what is the most hotly-contested shirt for next summer's tournament in Russia.

Joe Hart played instead - while Jordan Pickford and Tom Heaton are also strong contenders - but England's World Cup-winning keeper Banks voiced his opinion this week that Butland should be first choice.

The pair have become close since Butland took over as Stoke's number one and have regular chats.

Butland said: "Gordon is amazing. I speak to him every other week nearly. He's always got my corner. He's a great person to have on my side.

"He called me after I broke my finger. We don't have technical chats, we just have a nice chat.

"We've had chats about his England career and we've spoken about the World Cup back then. But he is really eager to know what it's like nowadays and what my routine is like.

"I couldn't really get a word in because he wants to know what we get up to as goalkeepers now in training and everything like that, but maybe next time I can ask him a little bit more about his stuff without him leading the conversation."

It was particularly unfortunate for Butland to suffer another injury on England duty after the broken ankle he sustained against Germany last March that sidelined him for more than a year.

Thankfully, this one was much less serious, keeping him out for only four weeks.

"To miss out on playing for your country sucks," said Butland.

"Then that carried on into missing games for Stoke as well so it's disappointing and not great timing, but hopefully I'll have a little bit more luck now going into the rest of the season and hopefully get myself in the squad for the summer.

"Injuries are injuries and touch wood I've never had too many.

"I had a horrible one with my ankle, which wasn't my fault and was prolonged with mistakes from the outside, but I'm back where I want to be now.

"I never feel like I'm miles away, I'm just doing what I can do and hopefully I'll get the nod."

Butland's return was a fillip for a struggling Stoke side, for whom this was just a second win in eight matches.

The keeper played his part with a terrific late save to prevent Ryan Shawcross scoring an own goal after Xherdan Shaqiri and Mame Diouf had turned the match around following Wilfried Bony's early opener.

Butland said: " I made the decision on Friday. I felt like I was ready, the physios were happy with everything and the goalie coach had seen enough to know I was ready to play.

"Then we spoke to the manager, who was delighted, and that was that.

"It was strapped up, in a splint, immobilised and all that nonsense, but it's good enough that I can play through so I wanted to get back out there.

"We just needed to win. We've had a tough run and some disappointing results. We do like making it hard for ourselves and we did that again with going down so early, but it was great character shown by the lads."