It's a family affair for Swanson 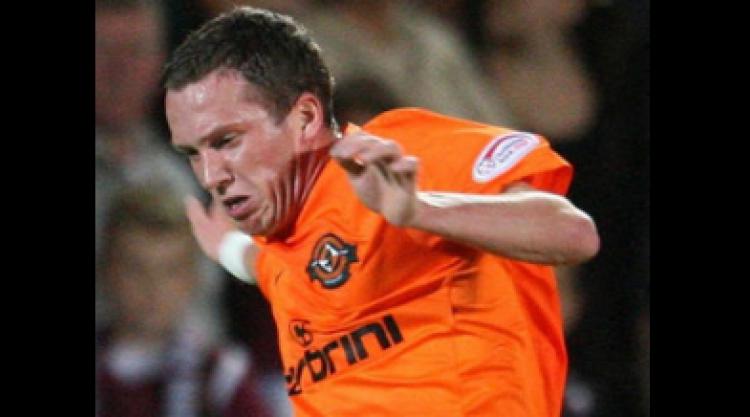 The Edinburgh-born 23-year-old struck just before half-time to help his side leapfrog Hibs into third position in the SPL with a hard-fought 1-0 win on Saturday.

But Swanson was expecting a frosty reception after the game following his goal.

He said: "My old boy is probably outside waiting to strangle me! I'm away to a party for a mate that is emigrating to Australia and he is a die-hard Hibs fan.

"He was here for the match and he always takes the defeats badly so we will see what his reaction is."

Swanson praised new team-mate Dusan Pernis, who pulled off a string of saves to thwart the Hibs attack. The Slovak stopper has now kept three clean sheets in his first three games for United.

He said: "The keeper has been brilliant. Nicky Weaver was the best goalie I have ever played with but big Dusan is up there too.

"He is so comfortable when he comes out for the ball and you know he is going to catch it. He is a good kicker and he really has got everything in his locker."

Swanson was relieved to get on the scoresheet and bail out team-mate David Goodwillie, who had earlier missed a penalty.

He added: "My goal was long overdue as I haven't scored this season. When Goody missed the penalty I was thinking it might not be our day but then luckily I scored and after that it was backs to the wall stuff.

"We had to work hard for the win as Hibs are always good going forward. But we stuck to our task and it was a great result."

Hibernian goalkeeper Graeme Smith was disappointed with the defeat that breathes new life into the battle to finish 'best of the rest' behind the Old Firm with United now a point above the Edinburgh outfit.

He said: "As a club the minimum we want to achieve is third so it is a bit of a blow to lose to Dundee United but it is a long way to go until the end of the season.

"As a team, we are disappointed that we couldn't create more chances for the strikers to score. I don't think Dundee United have changed too much since Craig Levein left.

"They are a big, strong side and we knew what was coming our way. The result is disappointing but the worst thing you can do is dwell on it. You put it to bed and hopefully in the next match you can put it right for the supporters."

Smith, who recently joined the Easter Road side on a free transfer from Brighton and Hove Albion, revealed his penalty save to deny Goodwillie was thanks to some swotting up prior to the match.

He added: "Sometimes it just comes down to luck but we try to get some information on the penalty takers. We calculated what may happen if they got a penalty and it paid off."