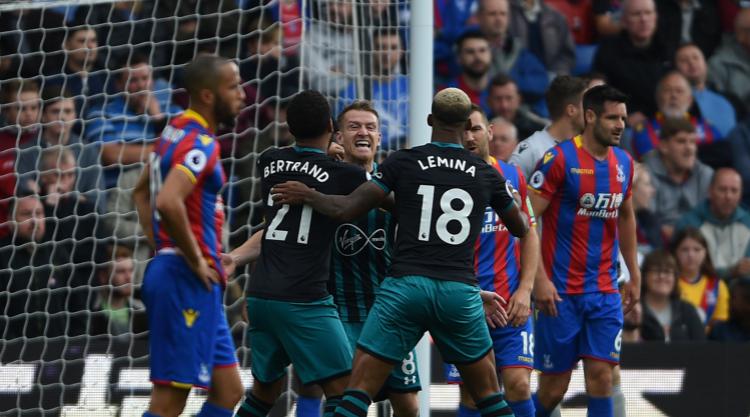 Roy Hodgson's first game as Crystal Palace manager ended in a 1-0 defeat to Southampton as they set two unwanted records at Selhurst Park.

Steven Davis' early goal for Saints means the Eagles have become the first ever top-flight team to lose each of their opening five league fixtures without scoring a goal.

Their pursuit of a first Premier League goal of the campaign is now longer than Newcastle's wait of 438 minutes in the 2005-06 season.

It took only six minutes for Southampton to expose the extent of the challenge Hodgson must overcome. Dusan Tadic beat Jeffrey Schlupp and though his cross was palmed out by Palace goalkeeper Wayne Hennessey, Davis was on hand to tuck it in as the appointment of the former England manager in place of Frank de Boer paid no instant dividend.

On-loan Ruben Loftus-Cheek - one of very few plus points in Palace's miserable season so far, combined with Andros Townsend after a quarter of an hour to square to Christian Benteke in front of goal, and the striker forced a fine save from Fraser Forster despite his shot lacking conviction.

On the half-hour mark Loftus-Cheek exchanged passes with Benteke before shooting just wide of the left post from 25 yards, and almost immediately afterwards latched onto Jason Puncheon's through-ball before Ryan Bertrand's block sent his effort wide.

By half-time the hosts were in the ascendancy and retained that momentum after the restart .

It took only four minutes of the second half for Schlupp to send a low cross to Puncheon, whose six-yard shot forced Forster to spread himself into a fine reaction save.

From then on though neither side created much, with Southampton having only scored twice in open play this season themselves.

The cheers that greeted Hodgson at the start were replaced by jeers when the Croydon-born boss chose to replaced Loftus-Cheek with Bakary Sako.

In the promising midfielder's absence, the equalising goal that had once looked likely gradually proved beyond them, and only Southampton's Cedric Soares threatened, forcing another save from Hennessey late on.

Even if Palace improved on their previous showings, they remain bottom of the table and with league fixtures against Manchester City, Manchester United and Chelsea to follow in the coming weeks.

Hodgson said at the time of his appointment that the challenge he had accepted was an easier one than those presented by Fulham and West Brom, On his first game's evidence, that may yet prove wrong.