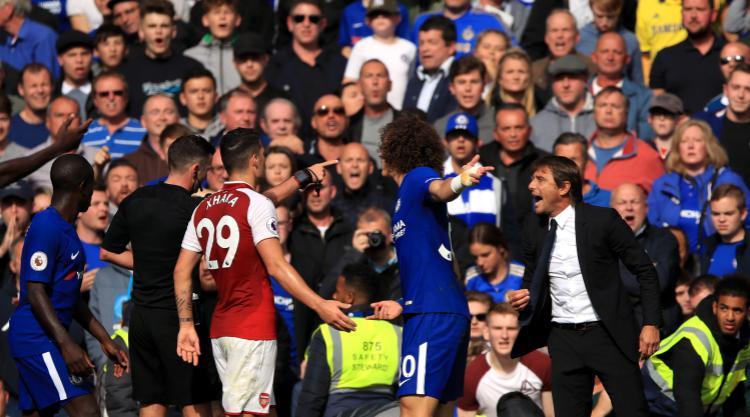 Chelsea head coach Antonio Conte felt referee Michael Oliver should have stopped play for a foul on David Luiz before the defender was sent off in Sunday's goalless draw with Arsenal.

Luiz was shown a straight red card late on for a poor challenge on Sead Kolasinac which saw both benches rise to their feet.

The Brazil defender, who had earlier been booked for catching Laurent Koscielny with an overhead kick, now faces a three-match suspension which would include the Premier League visit of Manchester City.

Conte reckons Luiz was fouled by Alexis Sanchez prior to the challenge which saw him dismissed three minutes from time.

Conte said: "It's very important to see what happened before the David Luiz tackle. For sure there was a foul.

"The referee has to use the whistle. If he stops the play before I think it (wouldn't) happen."

Arsenal boss Arsene Wenger felt it was the correct decision to dismiss Luiz.

"It was excessive force, yes. I think Kolasinac was not completely on his feet," Wenger said.

"Even Luiz will accept there was a big distance and he went in too strong."

Chelsea may yet appeal against the length of the suspension, which will also see Luiz miss Wednesday's Carabao Cup clash with Nottingham Forest and next Saturday's league trip to Stoke.

The Blues have now received five red cards in their last eight games, including May's FA Cup final loss to Arsenal, with four of those this season.

Conte said Chelsea must work on their disciplinary record, like other aspects of the game, and require more good fortune - in avoiding dismissals and in opponents being sent off.

The Italian said: "I hope to be more lucky with the referee's decision, for us and also for the opponent.

"Sometimes the opponent deserves a red card and instead they continue to play with 11 men."

Chelsea had scored in their previous 23 Premier League games at Stamford Bridge, but were held by an Arsenal team which ended a five-match losing streak here in the first goalless draw between the sides in more than 12 years.

The Gunners had the better chances, the best when Alexandre Lacazette shot wide after Aaron Ramsey had hit the post, while Shkodran Mustafi had a goal ruled out correctly for offside.

Arsenal still have not won in the Premier League here since October 2011, but this was the first time there has been parity.

Wenger's men are still chasing a first away win against the established top six since January 2015 at City, but this was much improved following the 4-0 loss at Liverpool.

Wenger said: "It's true you have to accept when you deliver the type of performance we had at Liverpool that you are criticised.

"You have only one way to respond, on the pitch. That's what we did today.

"It was vital for us, even above the result, to come out with a solid performance.

"It was a battle all over the pitch. We responded well.

"Overall I feel it's a deserved point. And with a bit more freedom, less inhibition, we could really have won this game with one or two goals difference.

"It was important at least not to lose today. You could feel within the team in the last 20 minutes we played a bit with that in our mind."