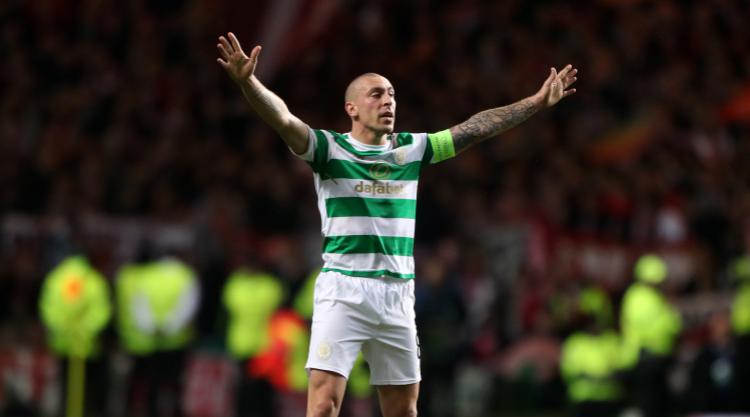 Scott Brown has challenged his Celtic team-mates to prove boss Brendan Rodgers wrong by showing they can cut it amongst the Europa League big guns.

The Hoops clinched third spot in their Champions League group to book themselves a slot in UEFA's secondary competition.

But Tuesday night's 1-0 defeat to Anderlecht was another sobering lesson for Rodgers' side as they finished their Group B campaign having lost five of their six matches.

The Parkhead manager admitted the result was a wake-up call for certain members of his squad as he said: "Some of our players have a long way to go before they can call themselves players at this level.

"We need to be better, but we've shown that we can be."

Skipper Brown admits those words stung but believes the opportunity to make amends could come when Celtic enter Friday's draw for the Europa League's last 32.

Rodgers' men will be unseeded and could face major powers like Atletico Madrid, CSKA Moscow, Arsenal or AC Milan.

"Those are always hard words to hear but this is when you have to go and prove everyone wrong," said the midfielder.

"Tuesday was a very disappointing game but we know we can play better than that. It's the big games that count but we didn't do that against Anderlecht.

"We're into the Europa League now and we'll just need to see what draw we get.

"There are some fantastic teams in the hat so we're looking forward to the draw on Friday.

"We can take a lot of lessons into the Europa League, especially about playing at home. We need to get a victory or something to hold on to when we go away from home."

Celtic knew they as long as the avoided being beaten by three clear goals they would edge out Anderlecht to third spot.

But there was no sign of the spark that saw them beat the Belgians 3-0 in Brussels and the nervy Hoops had Craig Gordon to thank for a couple of important saves early on.

Brown admits his side were not at their best but insists the main objective of prolonging their European run beyond Christmas is all that matters.

He said: "The lads are a bit disappointed but things will come around once we realise we've achieved what we set off to do at the start of the group.

"We were fourth seeds and managed to finish third and that was our aim at the start of the campaign - but it's still a bit bittersweet.

"It was always going to be a hard group for us with PSG and Bayern in there and we're disappointed to get beaten at home, especially in the last game when we wanted to do something for the fans and make it a little bit special for them.

"We kind of got played at our own game a bit on Tuesday. We are a possession-based team who tries to press high up the park but that's what Anderlecht did to us."