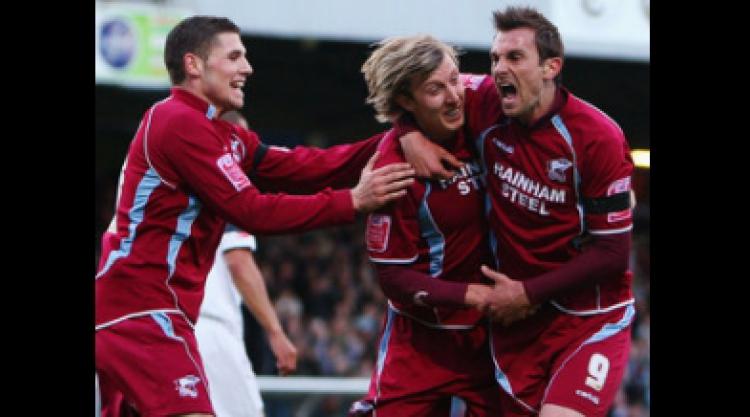 Hayes, who played for the Tykes for two seasons before leaving in 2007, popped up at the back post to head home a loose ball and cancel out a Barnsley lead that had last just six minutes.

That advantage had been deservedly given to the hosts seven minutes after the break when Hugo Colace drove the ball home from inside the penalty area.

Neither side really excelled in a game of low quality, although Scunthorpe could have won it near the end when Garry Thompson shot just wide from the edge of the area.

After a drab opening, which saw both sides off the pace, Barnsley produced the first real opening when Adam Hammill broke free down the left.

He found Daniel Bogdanovic, who cut inside and curled an effort that Joe Murphy did well to palm away.

The Tykes, who have been enjoying a resurgence since Mark Robins came to the club in September, found their feet and were beginning to look dangerous.

Murphy expertly tipped a Ryan Shotton header over the bar and the lively Bogdanovic wasted a good chance to pick out a team-mate from a decent position in the box.

Scunthorpe offered very little going forward in the first half, with Grant McCann - one of three ex-Barnsley players in the Scunthorpe line-up - providing their best moment when he drove wide from 20 yards.

And McCann was in the thick of the action again soon after the break and he called Luke Steele, who had previously been redundant in the Barnsley net, into action by forcing the keeper into a full stretch save from a 20-yard free-kick.

The game had more life after the interval and Barnsley went close to breaking the deadlock, but Jon Macken's hooked effort flashed just wide of the post after Hammill's cross.

But the Tykes did not have long to wait before they took the lead after 52 minutes, that on balance their play had deserved. Bogdanovic advanced down the right and cut back before crossing for Colace, who swept the ball home from 12 yards to net his second of the campaign.

But their lead lasted barely six minutes as Scunthorpe responded in perfect fashion.

McCann whipped a corner to the near post, which Cliff Byrne sent crashing into the post. The ball rolled across goal and Hayes was at the back post to nod the ball home.

Both sides pushed for a winner, but it was the visitors who came closest to snatching the points when Thompson flashed an effort wide of the post in the last minute.