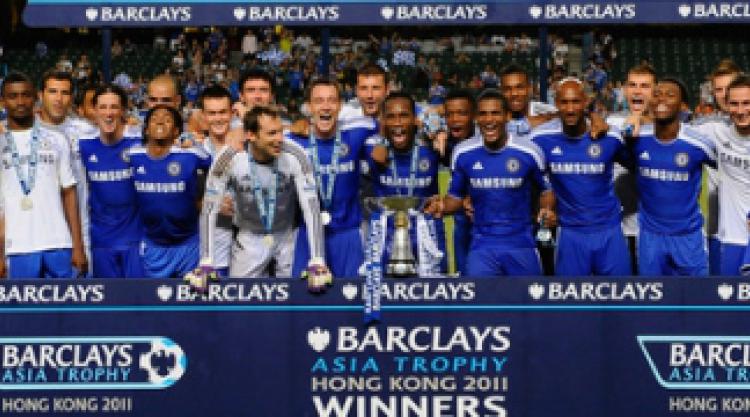 Substitute Fernando Torres made an instant impact as Chelsea lifted the Asia Trophy with a 2-0 victory over Aston Villa at Hong Kong Stadium.

The Spaniard sidefooted Florent Malouda's low shot past Shay Given after being introduced just before the hour mark to add to Josh McEachran's early opener on Saturday.

Boss Andre Villas-Boas once again shuffled his line-up with Nicolas Anelka starting up front, meaning Didier Drogba and Torres had to settle for a place on the bench.

With the game barely under way, Chelsea took the lead. Given did brilliantly to deny both Anelka and Malouda but McEachran was on hand to pounce from close range.

A slick Chelsea move 10 minutes before the interval then ended with McEachran sliding the ball through to Anelka but his low shot was held by Given.

Stiliyan Petrov's volley skidded wide six minutes into the second period after the ball fell to the skipper following a corner before Fabian Delph hacked John Terry's towering header from a corner off the line.

Chelsea should have doubled their lead immediately afterwards when Malouda's cross picked out an unmarked Frank Lampard in the six-yard box but his downward header was straight at Given and Daniel Sturridge then blazed the rebound over.

Villas-Boas then introduced both Torres and Drogba with almost an hour gone and the Spaniard netted Chelsea's second within seconds of coming on when he diverted Malouda's low strike past the diving Given.

Patrick van Aanholt then fizzed a drive just beyond Given's far post and the Irishman denied Torres with his legs after the striker had breezed past Richard Dunne.

Darren Bent wasted a good opportunity with 11 minutes left when he latched onto a flick-on and raced clear but fired over the crossbar and Emile Heskey shot narrowly wide as Villa failed to breach the Chelsea rearguard.