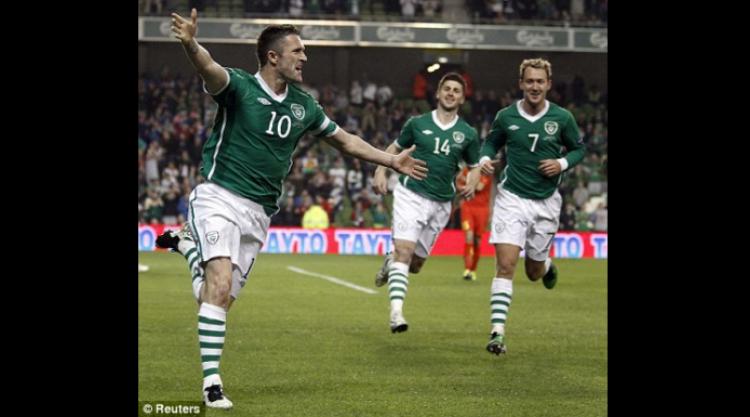 Skipper Robbie Keane has called for an overhaul of the disciplinary system which will deprive Republic of Ireland of key defender Richard Dunne for their trip to Macedonia in June.

The 31-year-old picked up his second booking of the Euro 2012 qualifying campaign in last night's 2-1 victory over the Macedonians at the Aviva Stadium and will therefore sit out the return in Skopje.

But Keane insists it is unreasonable to expect defenders not to incur two cautions over the course of 10 group games.

'It's ridiculous, they need to change that rule. It's a shame that Richard is going to be missing, he's a massive, massive player for us.

'Hopefully we get people like John O'Shea back fit and Shay Given, the experienced players. Hopefully they will be fit in June. But Richard is a big loss, obviously.'

In the thick of it: Dunne picked up a yellow and will miss the clash with Macedonia in June

Dunne was one of six men, three from either side, to beyellow-carded by Hungarian official Istvan Vad, although there wasastonishment within the Irish camp that Macedonia defender BobanGrncharov did not see red for an horrendous 49th-minute challenge onShane Long.

Grncharov took full retribution for an earlier run-in when he caughtLong with his studs in the side of the head as the striker jumped tomeet a high ball, leaving him with wounds which required three stitches.

Keane said: 'It was an horrific tackle and certainly a red card, there's no question.

No second thoughts: McCarthy is pleased to put speculation about his international future behind him

Meanwhile James McCarthy emerged from his senior debut for the Republic of Ireland delighted to have finally ended the debate over his allegiance.

Ireland international and end Scotland's hopes of persuading him to change his mind.

Glasgow-born McCarthy has spent the last few weeks at the centre of a debate over whether or not his mind was firmly made up following his withdrawal from Giovanni Trapattoni's squad for last month's Carling Nations Cup clash with Wales.

Club boss Roberto Martinez further muddied the waters last week when he suggested that there could yet be room for manoeuvre, although the player was quick on his arrival in Dublin to insist that the country of his heritage rather than that of his birth had won out.

McCarthy said: 'I'm delighted to make my debut. The fans were great with me. There was nothing in the stories that came about. Hopefully I can get many more caps.

'It's been different class. The boys have made me really welcome. It's just great to be amongst it and get some game-time under my belt.'