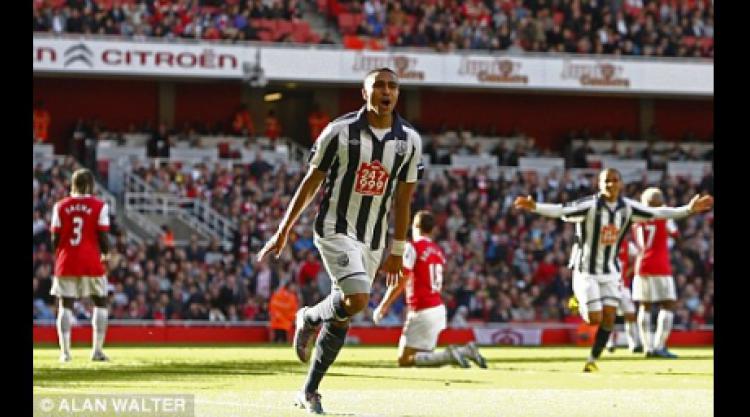 Thomas made three appearances as a youngster at Arsenal but helped the Baggies to a 3-2 victory at the Emirates Stadium on Saturday, scoring and providing an assist.

He left the club six years ago and and believes that Wenger's current side are nowhere near as good as the 'Invincibles' of 2003-4.

Gunned down: Former Arsenal youngster Jerome Thomas wasn't impressed with the side he faced at the Emirates on Saturday

Thomas said: 'In front of me there was Pires, Ljungberg, Vieira, Begkamp and Henry. No disrespect to the Arsenal team now, but the standard is not as high - and that's why a lot of the youngsters are getting their chance now.

'We won the FA Youth Cup when I was at Arsenal, and a lot of those players have moved on and done well - people like Jermaine Pennant , Steve Sidwell and David Bentley .

'I don't think it was a case of English lads getting fewer chances than foreign lads here, it was more a case of who was playing ahead of us in the first team at the time.

'I would like to think I would have had more of a chance when I was here, but you can't dwell on that. I chose to leave, there are no regrets and I don't hold any bad feeling towards them.'