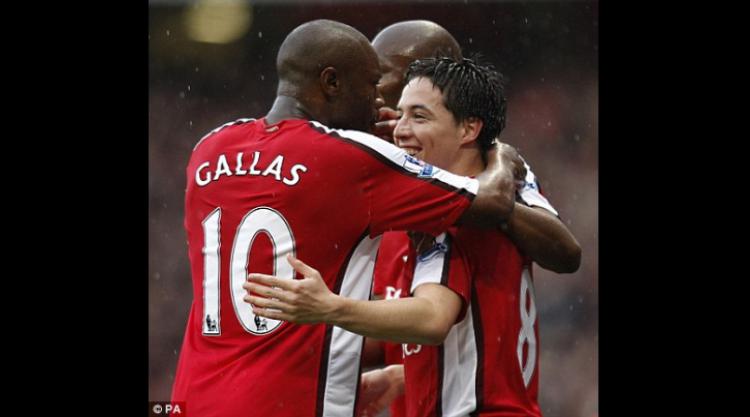 Samir Nasri has told friends he will not shake the hand of William Gallas before Saturday's north London derby.

The pair fell out more than two years ago and Nasri is in no mood to make peace with his former Arsenal captain, now at local rivals Tottenham.

Only once before have players refused to shake hands since the Barclays Premier League introduced the pre-match goodwill gesture, when Wayne Bridge snubbed John Terry after allegations of Terry's affair with Bridge's former girlfriend.

The feud between Nasri and Gallas stretches back to a row on France duty at Euro 2008 and intensified when Gallas wrote in his autobiography about the insolence of an unnamed youngster, now known to be Nasri.

Respect: Samir Nasri is looking forward to enemy William Gallas, who publicly criticised the 23-year-old, returning to the Emirates

Those were among a series of explosive utterances about thecharacter of Arsenal's squad which prompted Arsene Wenger to stripGallas of the captaincy, two years ago almost to the day.

Despite the pair being team-mates at the Emirates for two seasons, Nasri admits he did not speak to Gallas for nearly a year.

French elders: Nasri supposedly showed a lack of respect when he took Thierry Henry's seat on the France team bus at Euro 2008

Nasri, who starred in midfield for France in Wednesday's 2-1 defeatof England, has been urged by those close to him to put aside pastdisagreements and accept Gallas's hand.

'You can play together without being completely tight,' said Arsenalmanager Wenger. 'After all, these are professional football players.'

Last night, some Arsenal players were trying to talk Nasri out ofinflaming the situation with a public snub and Wenger defended Gallas.

'He can sometimes be excessive but he's an honest character,' saidWenger. 'I look at how much the guy wants to win and how committed heis. On that front you can never fault Gallas. He has massive experienceand will be focused to play well.'

Gallas expects a stormy return to Arsenal, but Spurs boss HarryRedknapp said: 'The boy's got the courage to be willing to leaveArsenal and come and play at Tottenham. That tells you something abouthim. It's easy to go, "Oh no, I can't do that, I'll go somewhere else"but it didn't bother him.

'He said, "I played for Arsenal, it was part of my life, I playedfor Chelsea, now I play for Tottenham". 'Patrick Vieira was the same.Vieira wanted to come to Tottenham. He was a legend at Arsenal morethan William Gallas.'

Wenger, meanwhile, will freeze out Nicklas Bendtner today, eventhough the striker is fit. Bendtner, who trained normally this weekdespite not reporting for duty with Denmark, has not played since anoutburst about his lack of first-team opportunities. He will beinvolved against Braga in the Champions League on Tuesday.