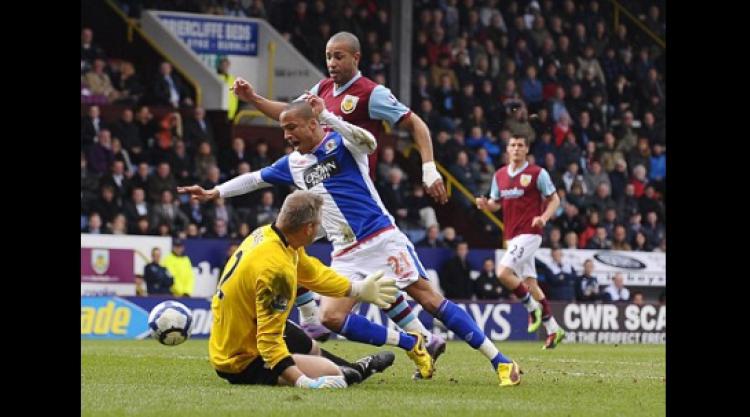 Olsson provoked outrage among Burnley fans when he appeared to dive over goalkeeper Brian Jensen, only for referee Mike Dean to award a spot-kick.

The Swede then compounded his offence by admitting it publicly and revealing that he targeted Dean in advance because he has awarded more penalties than any other referee this season.

Olsson somehow escaped FA censure but Allardyce was not so forgiving over an incident which he claims has damaged Blackburn's reputation.

Over we go: Olsson hits the turf to secure the crucial penalty against Burnley

Allardyce said: 'We have talked to Martin about both issues.

'It is something that has been dealt with internally and we move on.From our point of view you look at the situation and we coach ourplayers to play football, we don't coach them to dive.

'We have had one booking all season for simulation and it shows the sort of club we are.

'We are wrongly done to on many occasions in terms of bad decisions.

'This time we have got something we shouldn't have.'

GRAHAM POLL: FA should throw the book at Olsson for his blatant cheatingOlsson: I dived to get a penalty from a ref who nearly always awards them GRAHAM POLL: Martin Olsson takes flight to book his place in my worst five dives of the seasonBurnley 0 Blackburn 1: Trouble flares as Brian Laws fumes over harsh callBurnley and Blackburn fans charged after crowd trouble in derby clashBLACKBURN ROVERS FC