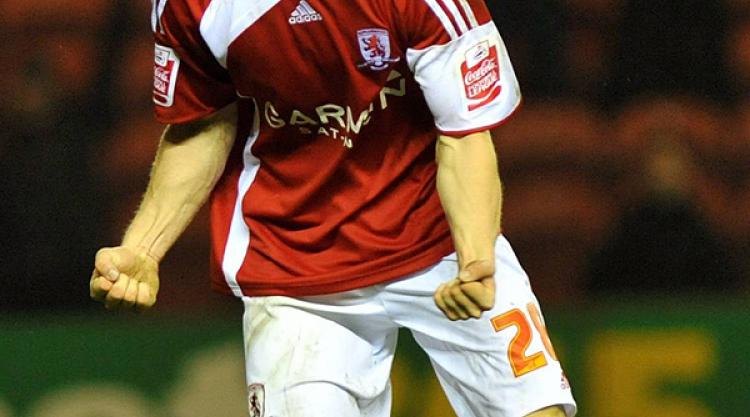 MIDDLESBROUGH'S squad might have been ravaged by a virus in the last five days, but it was Preston's players who left the Riverside last night feeling under the weather.

The gap will be back to eight if Cardiff win at home to Sheffield United this evening, but reports of the death of Middlesbrough's play-off hopes may have been slightly exaggerated.

There is fight in the Teessiders yet, but they will have to improve on last night's limp display if they are to feature in the end-ofseason shake up.

A two-goal margin flattered Boro, and the final scoreline owed much to goalkeeper Brad Jones, who produced two fine first-half saves, and referee Steve Tanner's decision to wave away strong Preston claims for a late penalty.

Strachan's decision to cancel Monday's training session might have ameliorated some of the damage caused by this week's virus, but Julio Arca and Gary O'Neil were still restricted to their sick beds last night.

Throw in the absence of Scott McDonald, who suffered a hamstring injury in training, and the hosts were short of numbers to the extent that defender Joe Bennett was fielded as an emergency left winger.

If Strachan hadn't had that in mind when he sold Adam Johnson in January, he certainly wasn't too enamoured by the idea when he hauled the youngster off to be replaced by Kyle Naughton at half-time.

Unsurprisingly, such a makeshift Middlesbrough side appeared rusty for much of the evening.

They were indebted to Aussie keeper Jones a player who continues to divide Riverside regulars who threw himself to his left to claw out former Sunderland midfielder Ross Wallace's 25- yard free-kick, before producing an equally impressive stop to prevent another former Black Cat, Darren Carter, from sneaking a low drive inside the left-hand post.

Preston were the ascendant force early on, with midfielder Richard Chaplow pulling the strings, but almost from nowhere, the visitors found themselves trailing in the 29th minute.

Barry Robson slung over a deep free-kick from the right, and Killen barged through a crowd of players to head home his second goal of the week.

Killen's muscularity caused further confusion in the Preston defence six minutes after the interval, but while Franks found the target with a shot that fizzed through a crowd of players, goalkeeper Andy Lonergan kept the ball out with his legs.

Middlesbrough's secondhalf efforts were more threatening than their first, although how Chris Brown failed to level things in the 55th minute only he will know.

The Wearsider controlled Carter's low cross on the edge of the six-yard box, but took an eternity to swivel towards goal, enabling Robson to produce a last-ditch tackle.

That was a let off for Boro, but it was nothing compared to what followed on the hour mark. Wallace cracked a searing left-footed volley against the upright, and while the ball rebounded off a helpless Jones, it rolled harmlessly to safety.

The hosts' defence creaked again with 12 minutes left, but while Stephen McManus appeared to bring down Carter in the box, play was controversially waved on.

Franks then made the win safe in the final minute, rolling the ball into an empty net after Lonergan had saved from substitute Leroy Lita.