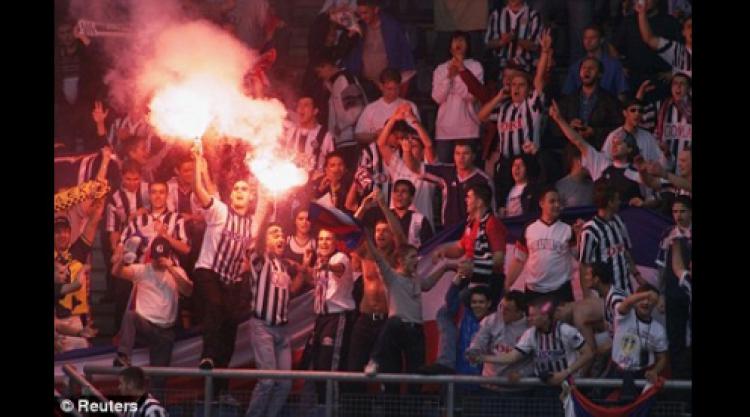 Partizan Belgrade coach Aleksandar Stanojevic believes the intimidating atmosphere in their stadium can help then overcome Arsenal in the Champions League tomorrow.

It is seven years since Partizan last competed in the Champions League and Stanojevic is confident the fans in the Stadion FK Partizan can play their part.

He said: 'This is confirmation of the level that Serbian football is at.

Cauldron: Belgrade boss Stanojevic has called on fans to turn up heat on Gunners

'It's very prestigious for people of the Serbian capital and shows where we are now, the players and for me as a coach.

'We are mentally tough with strong individuals.

'We'll have a full stadium which generates great energy. I believe in that energy.

'I think everyone can be defeated. I believe in the club and the players. This team has great character and a strength that makes me we believe can surprise Arsenal.'

Wenger is losing it: Fuming boss turns on Arsenal players after Albion defeatMARTIN SAMUEL: Sorry Manchester City, but one big win does not make you contendersArsenal 2 West Brom 3: Gunners labour in leadership battle with no CescARSENAL FC