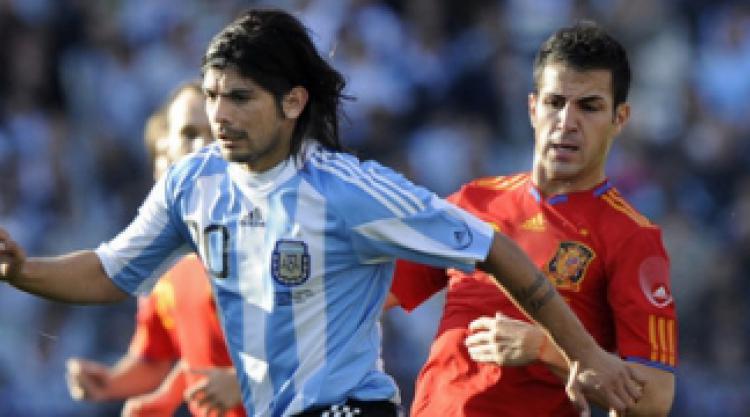 Spain midfielder Cesc Fabregas felt his side did not deserve to be on the receiving end of a 4-1 mauling by Argentina.

Spain, the reigning world and European champions, shipped four goals in a match for the first time in a decade and suffered only their third defeat in 58 matches stretching back to 2006 after coming up against an impressive Argentina outfit in Buenos Aires.

The Iberian nation could hardly have suffered a worse start, finding themselves 2-0 down after 14 minutes following goals from Lionel Messi and Gonzalo Higuain and then shipping a third in the 34th minute, Carlos Tevez pouncing on a Jose Reina slip.

Vicente del Bosque's side, which included five changes to the team that beat Liechtenstein 4-0 on Friday, fought hard to try and get back into the match and, as well as hitting the woodwork three times, pulled a late goal back through Fernando Llorente.

However, Sergio Aguero netted a fourth goal for Argentina in injury time to wrap up a big win for the home side.

Fabregas, who started in place of Barca schemer Xavi, said of the match: "Nobody likes to lose. We knew that it was a difficult game and, although there are excuses, we don't want to make them.

"One day something like that had to happen. We need to applaud them because they had four chances and scored four goals. It's true that it wasn't our best game, but neither was it a 4-1.

"We hit the post three times and had more chances. I think the result was too emphatic."

Villarreal playmaker Santi Cazorla added in AS: "We didn't deserve to lose 4-1, but they went ahead very quickly and were convincing in attack. We had chances, but we didn't have the luck in front of goal.

"Spain hit the post three times and if one of those had gone in the game would've changed. Nobody likes to lose, although some day we too had to lose.

"It's a tough blow, the squad is upset."

Argentina's third goal was arguably the game's key incident as it came just as Spain looked to be getting on top, with David Villa just minutes previously hitting the crossbar from 30 yards.

The goal will be one that Spain goalkeeper Reina will not be keen to see too many times again.

There appeared little danger as Reina collected Alvaro Arbeloa's backpass but the Liverpool goalkeeper slipped as he looked set to return possession to his team-mate and Tevez nipped in to slide the ball home.

Reina said: "When you slip up you feel a tremendous responsibility and weight on your shoulders. But it was an unfortunate incident, a slip.

"Still, I must accept the error, you need to see it as an accident and move forward."

The Liverpool goalkeeper, who was enjoying a rare start in place of rested captain Iker Casillas, added: "You need to take advantage of the time the coach gives you and here that hasn't been the case.

"Messi was phenomenal, like the rest of the Argentina team, and we congratulate them. Maybe we aren't used to losing but hopefully they only come in friendlies and the team can improve after.

"The third goal sentenced us for the rest of the game. Even then we hit the woodwork three times and the team did not give up. Those are positives to take from the match."