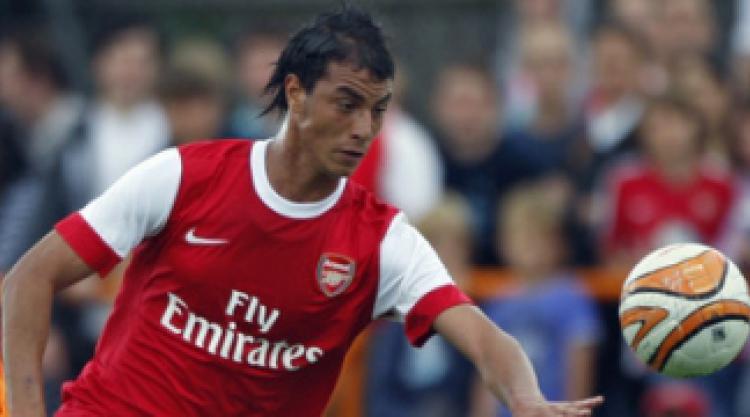 Arsenal new boy Marouane Chamakh hopes he will soon feel right at home in England after joining the Gunners from Bordeaux.

Chamakh may have been raised in France and play international football for Morocco, but Arsenal's big summer signing expects to settle quickly in London.

Arsene Wenger finally secured the services of his long-term transfer target when the 26-year-old moved to Emirates Stadium on a free transfer at the end of his contract with Bordeaux.

Chamakh knows he faces stiff competition for a starting place in the Arsenal team - with World Cup finalist Robin van Persie set to lead the attack, while the Moroccan battles the likes of Nicklas Bendtner, Andrey Arshavin and even England hopeful Theo Walcott for the second striker role.

However, the tall forward feels he can bring something different to the table.

"Arsenal is a club which has always made me dream, it is the place I wanted to be and the shirt I wanted to wear more than any other," Chamakh said.

"It will not be easy to get in the team here because of all the great players we have, but I think I can add value to the team.

"I won't have any trouble to fit into the Arsenal style of play, but I can bring something more too with long balls towards me if we are struggling during a game because I am strong in the air.

"With my height and qualities in the air, playing in England was always the best choice for me.

"I know I still have a lot of hard work to do to perform well in the Premier League, but I am very motivated and hungry to do well."

Chamakh added in the August edition of the official Arsenal magazine: "My favourite position is up front with another striker as I can complement another forward perfectly.

"However, I can play on my own as well, drift onto the right or left and I will do what the boss asks me.

"I love scoring goals, it is my job, but I am not obsessed.

"I am not what you call a very selfish striker, I am very collective in my game.

"I love playing for the team, working hard for the team and help to make other people shine too."

Arsenal fans got their first chance to see Chamakh in action during the opening pre-season friendly at Barnet.

While the striker did not get on the scoresheet during his 45 minute run-out, Wenger had plenty of reasons to be hopeful for the tougher challenges which await.

"You could see Chamakh was very good at bringing players in," said the Arsenal boss.

"With our creative midfielders, that will be suited to our game."

Wenger is in no doubt Chamakh has what it takes to make the grade in the hustle and bustle of the Premier League.

"Chamakh is a striker of real quality and has all the attributes suited to come to England and do very well," said the Arsenal manager.

"He is also not only a good football player, but a fighter as well, very good in the air and also a good team player.

"He is a great addition to our squad."

Come next May, Arsenal fans will be hoping their manager is, once again, proved right.