Arsene Wenger has faith in latest crop of Arsenal youngsters 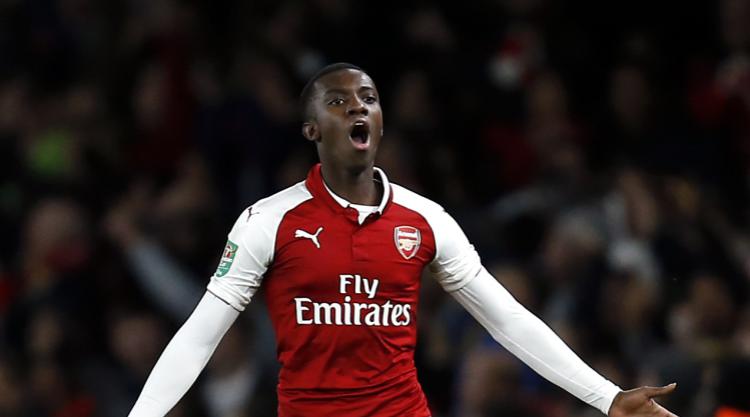 Arsene Wenger will rotate his squad for Arsenal's Carabao Cup quarter-final clash with West Ham and has backed the latest crop of young players to become the future of the club.

The Frenchman has a history of using the competition as a way of blooding talent in the first team and that has been the case again this season.

The Gunners welcome West Ham to the Emirates Stadium looking to reach the semi-final of the only domestic competition Wenger has not won since taking charge of the club 21 years ago.

With his side having looked lethargic in Saturday's 1-0 Premier League win over Newcastle and on the back of two away draws against Southampton and the Hammers, it is clear that Wenger will once again shuffle his pack.

While that could mean starts for international players such as Danny Welbeck, Mathieu Debuchy and Mohamed Elneny, it is also a chance for Wenger's young ensemble to impress.

Ainsley Maitland-Niles has started the last two league games having caught the eye in the Carabao Cup and Europa League this campaign.

And Wenger will continue to give chances to his young stars, such as Matt Macey, Joe Willock and Eddie Nketiah - who scored twice off the bench against Norwich in round four.

"It's a very exciting bunch of young players," Wenger said.

"I made the decision a few months ago to try and keep them at the club because I believe they all have futures at the club.

"I am convinced as well, but it is very important for Arsenal to continue giving chances to young players we educate here.

"For example on Saturday, we had four players who have been developed in our academy - Alex Iwobi, Jack Wilshere, Hector Bellerin and Ainsley.

"That shows you that our level you have not many teams who can show up with that. That's a positive sign. We have some good young players coming through as well, behind them. "

Macey, Nketiah and Willock are just three of a number of youngsters to sign new deals with Arsenal recently and - if they do start against West Ham - are likely to line-up alongside players on the fringes of Wenger's first team.

"We have so many quality players who have not started on Saturday but you cannot say that you prefer to play a player who has played three games in six days to a guy who is at the same level and is completely fresh," Wenger said.

"The players who will start are basically all international players, so that's why I think it's a decision that makes sense and you have as well to show the trust and the confidence that we have in the players.

"That's where I come back to. We've got a big squad of top quality and the best way to show that is to use all our squad.

"I trust this team, but I can talk and talk and talk. It's about what we do tomorrow on the pitch and how much we want it."