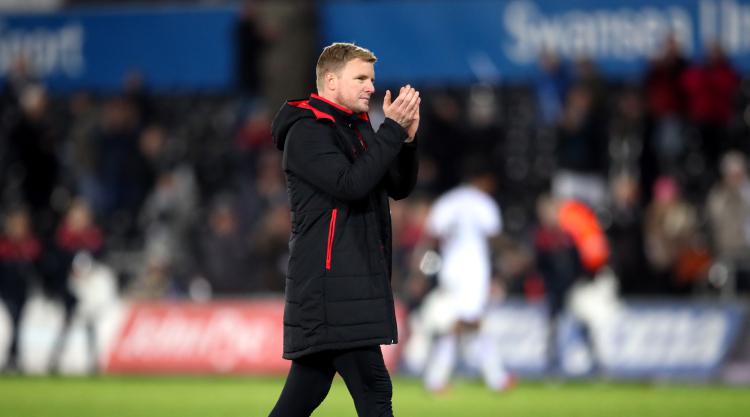 Manager Eddie Howe hopes he will be given a 40th birthday to remember by his Bournemouth team delivering three points from the visit of former club Burnley.

Howe had a brief spell in charge at Turf Moor from January 2011 to October 2012, before returning to the Cherries and helping guide them up into the top flight for the first time.

Both clubs, once plying their trade in the lower divisions, have since established themselves among the Premier League elite.

Howe would rather not dwell on passing his personal milestone, focused only on extending Bournemouth's current improved form.

"It is my birthday, but I have not been able to give it a minute's thought. It is a big one, turning 40, so I'm not looking forward to that to be honest," Howe said.

"I have not been called a spring chicken for a while, but I suppose in management terms I am still quite young. Hopefully I have many more games left in me."

Bournemouth's battling goalless draw at Swansea made it just one defeat from the past five Premier League games - and that coming away to Chelsea.

"We are in good shape, the players are in a good frame of mind, playing with confidence and we love playing here at home and under the lights," Howe said at a press conference, as quoted on the club's official website.

"We want to give a good account of ourselves and build on the good result we had here against Huddersfield in our last home game."

Burnley have again improved under Sean Dyche this season, which started with a 3-2 win at champions Chelsea, and now sit in seventh place.

The Clarets had won three successive games before a controversial stoppage-time penalty handed Arsenal a 1-0 win at Turf Moor on Sunday.

"I am not surprised, and you can never be surprised by what Burnley do," said Howe, who guided the Lancashire club to eighth place in the Championship at the end of the 2010/2011 campaign.

"They have continually overachieved and this season and when I have watched them I have been impressed with the style of how they going about playing.

"You know what they are going to do, but it is difficult to beat that.

"The confidence they got from the likes of the good Chelsea and Tottenham results early on gave them a great start and they now rightly sit in the top half of the table."