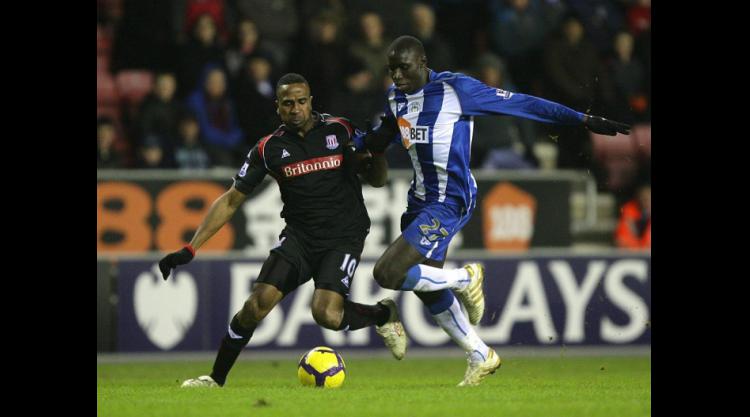 Deflections were the order of the day as Wigan and Stoke had to settle for a point apiece at the end of a lively 2-2 Barclays Premier League draw at the DW Stadium.

All the goals came in the first half, with Robert Huth getting the ball rolling with an 18th-minute free-kick that deflected in off Mohamed Diame in the wall.

If the Latics were cursing their luck, they got some of their own half an hour in as Danny Collins diverted Ben Watson's free-kick past his own goalkeeper.

A minute later, Matthew Etherington put Stoke back in front before Tom Cleverley levelled again five minutes before the break when his shot flew in off Rory Delap.

The result made it only one win in nine league games for Wigan, who will look back at a horror miss from Hendry Thomas as well as a late Charles N'Zogbia shot against the post as evidence they could well have claimed all three points.

The opening stages gave no indication of the drama to come, with a near-post effort from Ricardo Fuller that was well saved by Ali Al Habsi the closest either side came to a goal.

But in the 18th minute the Latics were left cursing their luck again as a debatable free-kick for a foul by Thomas on Fuller was converted in extremely fortunate circumstances by Huth.

The defender's effort from 30 yards was fairly weak but it caught the heel of Diame in the wall and rolled over the line, with Al Habsi totally wrong-footed.

Wigan responded well and probably should have equalised when Steve Gohouri got his head to a wicked free-kick from Ben Watson. The defender got plenty of power but directed his effort wide of the post with Asmir Begovic beaten.

Stoke had not learned their lesson, though, and, when Watson took another set-piece from a similar position, Collins could only divert the ball past his own keeper.

That brought the hosts level on the half-hour mark, but parity lasted less than two minutes as Stoke broke down the right through Kenwyne Jones, who played in Fuller on the right of the area.

The striker did well to pull the ball back and running into the box all alone was Etherington, who had the simple task of slotting his shot under Al Habsi.

Wigan could even have taken the lead themselves between the two goals, with Begovic producing a decent block to deny Mauro Boselli.

The Latics poured forward in search of a second equaliser, and only Thomas will know how he did not score. After Maynor Figueroa's shot was parried by Begovic, N'Zogbia laid it on a plate for Thomas, who somehow bobbled his shot wide from five yards.

But five minutes before the break, the home fans were celebrating, and for the third time a deflection played a crucial part in a goal. Cleverley cut in from the right and let fly from 20 yards, with the ball taking a key touch off Delap and nestling in the corner.

The second half began as the first had ended with more goalmouth action, and Begovic had to be alert to deny Boselli twice in a matter of seconds at his near post after Cleverley and Figueroa had worked the ball down the right.

The Latics now looked the better side but Stoke were inches away from taking the lead for a third time in the 54th minute.

A Delap long throw caused mayhem in the box and, when Jones' attempted shot looped up to Walters at the back post, he leapt above his marker but headed just wide.

Moments later, Jones drew a fabulous save from Al Habsi as a fine cross from Walters picked out the striker perfectly. Jones met it well but the Wigan keeper flung out his left hand.

The chances were not coming as thick and fast now but N'Zogbia nearly created a third goal for Wigan with 13 minutes to go as he worked his magic down the left before picking out substitute Ronnie Stam, who could only poke the ball wide.

N'Zogbia has been the Latics' best player this season and he ran at the Stoke defence again before unleashing a shot that was brilliantly tipped onto the post by Begovic.

Stoke had a couple of late chances, too, with Danny Higginbotham heading wide and substitute Tuncay Sanli looping a header from Etherington's cross into the arms of Al Habsi.