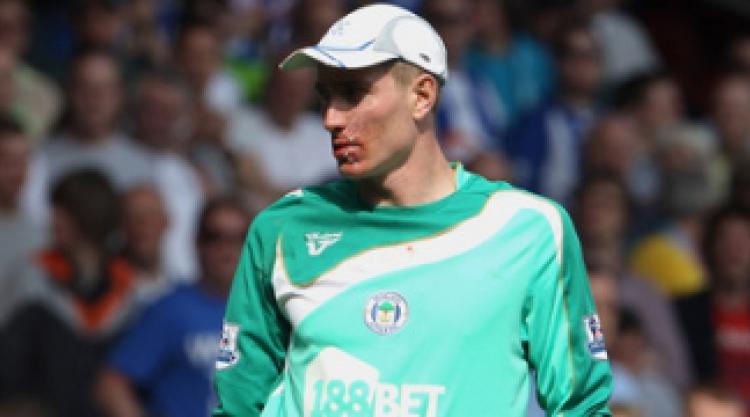 Wigan manager Roberto Martinez will not make Chris Kirkland a scapegoat for his side's dreadful start to the Premier League season.

Kirkland endured a personal nightmare as Wigan were thrashed 4-0 by promoted Blackpool at the DW Stadium last weekend.

Martinez has given the former Liverpool keeper no public assurances that he will start Saturday's daunting clash against Chelsea, but he will not single the 29-year-old out for blame.

The Latics boss said: "We win as a team and we lose as a team. Chris is a very experienced man now and he is very responsible.

"Sometimes being a goalkeeper you are a lonely figure on the pitch but he shouldn't take any extra responsibility.

"He has won many games and I am sure the players would agree with me that we are all together winning and all together losing.

"It has been a difficult week as a group and individually but that togetherness is a good sign."

Martinez has another good goalkeeping option in Ali Al Habsi, who has joined the club on a season-long loan from Bolton.

The Oman international watched from the bench as Blackpool ran the Wigan defence ragged six days ago.

"I want to have a strong squad," said Martinez, who has not ruled out further signings in the summer transfer window. "Everyone should be ready and on their toes.

"It is a very competitive group and that is the way we have to face it.

"Everyone has been training really well and everyone should be expecting to play on Saturday."

With the players still hurting from last week's embarrassment, a visit from the champions is probably the last thing Wigan need.

The last time the sides met Chelsea ran out 8-0 winners to celebrate their title success in style in the final game of last season.

Yet Wigan could take encouragement from their stunning 3-1 defeat of the Blues at the DW Stadium last September.

Martinez said: "We have a very responsible group and they know what it means to play for Wigan Athletic.

"Our biggest problem was that, in the first game of the season when you want to play well and impress the crowd, we forgot about certain basics.

"The players, staff and fans were hurt. Our success throughout history has been that we are a family club and we are all together.

"We will support each other to get through difficult periods.

"We know that we now need to focus on playing a very talented group of players in Chelsea. They have huge experience and a big winning mentality.

"It is going to be a real big test for us but it is at home and we want to take responsibility.

"We want to get the fans behind us and make sure we are as good as we can."

Martinez will consider recalling Charles N'Zogbia despite continuing speculation linking the winger with other clubs.

The newly-capped France international was left out last week after Martinez questioned his attitude but the manager has dismissed reports of a rift between the pair.

N'Zogbia could come in for 19-year-old Victor Moses, who has been ruled out with a calf injury.

Martinez said: "We thought Victor was going to be out for two to three weeks but he has reacted well to treatment.

"He is only a young man and is very fit.

"Saturday is maybe too quick for him but it is not as bad as we thought and he is not far away."