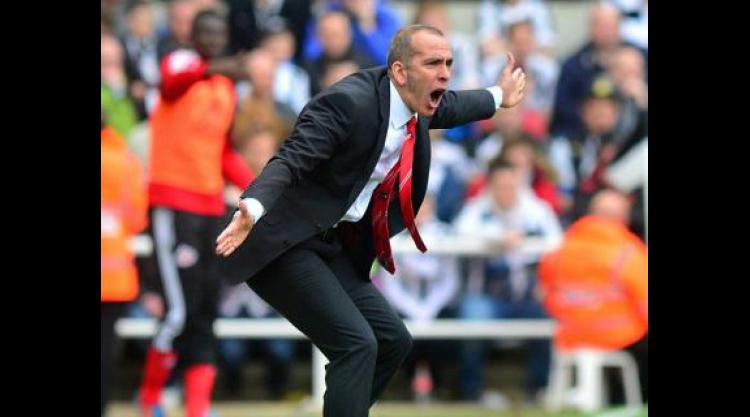 Paolo Di Canio has warned Sunderland they will never be anything other than "average" as long as they are happy for other clubs to do their dirty work.

The Black Cats are currently engaged in a tooth and nail fight for Barclays Premier League survival as they head into Sunday's home clash with Southampton just three points clear of the relegation zone.

They and their fellow strugglers were handed a significant boost on Tuesday evening when 18th-placed Wigan twice squandered the lead to lose 3-2 at home to Swansea, meaning three points this weekend would guarantee them their top-flight status barring a remarkable turn-around as a result of their superior goal difference.

However, Di Canio was dismayed when he arrived at the training ground on Wednesday at the general glee over the previous night's events at the DW Stadium.

He said: "I was angry because I don't like what is going on in this environment.

"I don't enjoy it and I will make sure in the future everybody has to change their mentality, not the players and the technical staff, the physios, the fitness coach, the refectory where they go for food, the directors.

"Everybody has to change mentality because if we are going always to delegate to others to do the job for us, we are going to remain an average team despite the fantastic potential the club has.

"I don't like it because I can help the players. But if they go to have a massage and they are talking about, 'Wigan, fantastic', `Wigan, fantastic', 'Maybe we can stay up even with zero points if they lose at Arsenal', we are never going to be something important here.

"We have to make sure we change that mentality."

Craig Gardner will miss out against the Saints through suspension.

The midfielder will not play again this term after being sent off for a challenge on Charlie Adam during Monday night's 1-1 Barclays Premier League draw with Stoke.

He joins the suspended Stephane Sessegnon and injured strikers Steven Fletcher (ankle) and Connor Wickham (calf), as well as midfielder Lee Cattermole (knee), on the sidelines, while on-loan full-back Danny Rose will play his final game for the club before returning to Tottenham, who host the Black Cats on the final day of the season.

Meanwhile, Mauricio Pochettino knows Southampton and Sunderland are both "playing for more than just the three points" this weekend.

The talk just a few weeks back was of the promoted side ending their seven-year Premier League absence with a top-10 finish.

However, Saints' four-match winless streak has been compounded by the teams around them picking up results, leaving them just four points above the drop zone.

Southampton boss Pochettino admits Wigan's midweek defeat was a relief ahead of their own penultimate match of the season.

"It is clear that we welcome any losses of rival teams that are in similar positions to ours," the Argentinian said. "We're always keeping an eye on those sort of games.

"We know that we have two games left, we need to do our job and get the maximum number of points from these last two games.

"We are very aware that the game on Sunday is going to be quite intense and that both teams are going to be playing for more than just the three points.

"We know that the atmosphere is going to be very much charged. We're going to face a side that has been physical ever since the arrival of Paolo di Canio so we are prepared to compete on Sunday."

Club-record signing Gaston Ramirez and left-back Danny Fox are both suspended for the trip to the Stadium of Light.