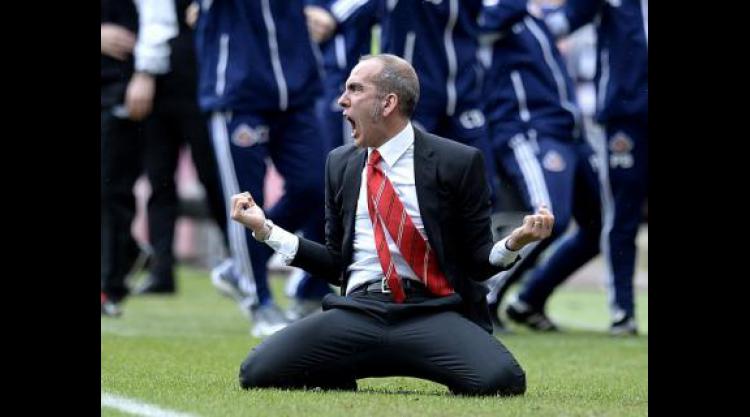 The 44-year-old Italian celebrated on his knees as the Black Cats romped to a 3-0 win at St James' Park, their first in enemy territory in 13 years and just their second anywhere in 17 attempts. A priceless triumph ended a run of nine league games without a victory and lifted the club three points clear of the relegation zone with five matches left to play.

Asked if that was how he had dreamt the first derby encounter of his reign would be, Di Canio said: "Can I tell you something? Sometimes, some special things have to remain inside yourself. It's not good to share with others because it's very deep inside yourself. But I believe in this thing. Before the kick-off, I saw the face of my mama smiling."

The Italian went on: "Exactly yesterday (Saturday), it was one year since she passed away. Exactly one year ago, there was the same situation. I was in the dug-out the day after she passed away and we won the game - I was at Swindon - and today, it has happened again.

"For this, I have to thank not only my mama, otherwise my dad - he is next to her, but today, he is going to be upset. But dad, mama was special today, so my dedication goes to her today, to my mam."

Sunderland took the lead with 27 minutes gone when the hugely impressive Stephane Sessegnon dispatched a low, skidding drive past Tim Krul. With 16 minutes remaining Adam Johnson fired past substitute goalkeeper Rob Elliot from distance, and David Vaughan added the icing to the cake with a superb 82nd-minute strike.

Di Canio added: "The big rivalry we have got in this area is very famous around the world, so to get the three points away from home against Newcastle was fantastic. But now we have to drop back and put both feet on the floor. For the result in the area, it is a massive step, but in terms of the table, it's a small step.

"We are on 34 [points] now, we are not safe, but it's obvious that it was a fantastic result for everybody."

Opposite number Alan Pardew was understandably subdued after a game which saw his side fail to claim a fifth successive home league victory in spectacular style.

He said: "We will have to wear it, probably next year as well. That's what happens when you lose one of these games. We are under no illusions as to the responsibility we have to our fans, and we have let them down 100 per cent."