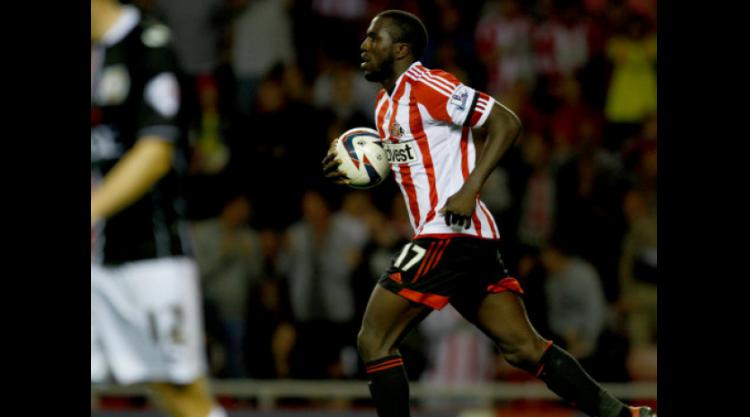 Sunderland 1-3 Arsenal: Match Report - view commentary, squad, and statistics of the game as it happened.


Di Canio was sent off in injury time, having had to watch Wales international Ramsey blast home a 67th-minute volley and then convert Olivier Giroud's pass nine minutes later to kill off the resurgent Black Cats.


The home side were left fuming after having what they believed was a legitimate equaliser chalked off, when Arsenal's lead was only 2-1.


Three minutes after Ramsey had put the visitors ahead for the second time, striker Jozy Altidore outmuscled Gunners skipper Bacary Sagna as the defender attempted to wrestle him off the ball.


The powerhouse United States international brushed off the Frenchman and stabbed the ball past goalkeeper Wojciech Szczesny and over the line.


Referee Martin Atkinson had already blown for a foul and called play back, much to the fury of the home fans.


The disallowed goal punctured the momentum the home side had built up after a poor start.


Ozil's virtuoso first-half performance was a thing of beauty, the B#43million German setting up Giroud to give Arsenal an 11th-minute lead and creating two gilt-edged chances for Theo Walcott, both of which went begging.


But the Black Cats, for whom central defender Modibo Diakite hit the bar three minutes after Giroud's strike, staged an impressive revival after the break.


They levelled within four minutes of the restart when half-time substitute Craig Gardner converted from the penalty spot after Adam Johnson had been tripped by Laurent Koscielny.


Former Real Madrid man Ozil was always likely to be at the centre of attention, and he responded in the best possible way by producing a first-half display which fully justified Arsenal's massive investment in his talent.


From the off, he led Sunderland a merry dance, interchanging neatly with Jack Wilshere behind frontman Giroud and picking out angles which left the Sunderland rearguard in disarray.


Walcott scuffed a shot harmlessly across goal from his fifth-minute corner, but it was Giroud who was the beneficiary of the German's brilliance as the Gunners took their early lead.


Ozil killed Kieran Gibbs' lofted ball down the left in an instant and just as swiftly rolled a cross into the path of the Frenchman, who swept it past goalkeeper Keiren Westwood with the minimum of fuss.


Sunderland were very nearly level within three minutes when an Arsenal defence deprived of the services of Per Mertesacker through illness allowed Diakite to head against the crossbar from a corner, and Altidore forced Szczesny to beat away a long-range effort.


However, that was as good as it got for the hosts, who had Westwood to thank for keeping them in the game.


Twice in the space of 13 minutes, Ozil sliced them open to put Walcott in on goal, but the England international could find the right finish.


Walcott might have opened his account two minutes before the break when he met Giroud's cross with a diving header, but he was unable to hit the target.


Di Canio looked to provide his defence with greater protection when he replaced David Vaughan with Gardner at the break, and the newcomer was to make an unexpectedly early impact.


Koscielny was adjudged to have tripped skipper-for-the-day Johnson in the box after the visitors failed to deal fully with a corner and Gardner, who had been on pitch for less than four minutes, sent Szczesny the wrong way from the spot to level.


Suddenly, Sunderland looked a completely different proposition as they took the game to the visitors, Steven Fletcher seeing a 59th-minute effort ruled out for offside and Gardner hitting the post with a free-kick two minutes later.


But Arsenal managed to re-group and regained the lead with 23 minutes remaining when Carl Jenkinson crossed from the right for Ramsey to smash a fine volley past Westwood.


The Black Cats thought they had clawed their way back into it once again with 20 minutes remaining courtesy of Altidore's disallowed strike, but Ramsey rubbed salt into the wounds six minutes later when he made the most of the link-up between Ozil and Giroud to cement the win.


Di Canio departed prematurely after making his feelings plain and drawing the attention of referee Martin Atkinson, but he was at least able to console himself with a much-improved second-half showing.