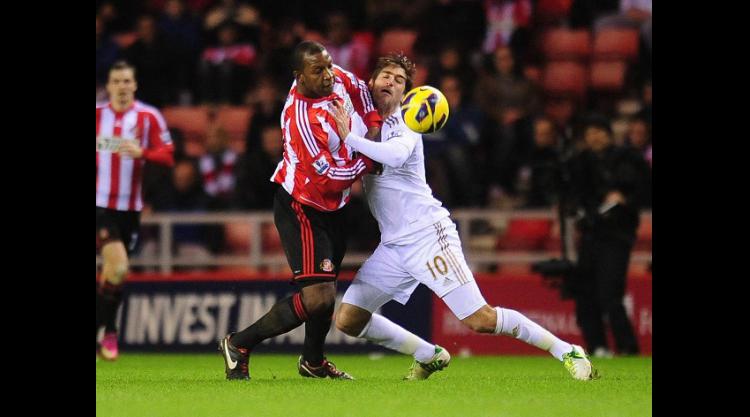 Sunderland 0-1 Arsenal: Match Report - view commentary, squad, and statistics of the game as it happened.

Santi Cazorla fired 10-man Arsenal to a 1-0 victory at Sunderland as Arsene Wenger saw his side survive a late onslaught.

The Spaniard struck 10 minutes before the break to give the Gunners a deserved lead as Black Cats keeper Simon Mignolet turned in another fine display to otherwise keep them at bay.

However, the 62nd-minute dismissal of defender Carl Jenkinson, who was only included after Laurent Koscielny injured himself during the warm-up, for a second bookable offence left the Londoners hanging on in front of a crowd of 46,402.

Steven Fletcher had earlier passed up a glorious opportunity to level but, even after Jenkinson's departure, Arsenal had chances and Theo Walcott was unfortunate to see a 75th-minute effort come back off the post.

However, goalkeeper Wojciech Szczesny spared Per Mertesacker's blushes three minutes later when he blocked Fletcher's shot after he had charged down the defender's attempted clearance and the visitors managed to see the game out amid a frenzied conclusion.

In a promising start, Black Cats midfielder Alfred N'Diaye looped a first-minute header over Szczesny's crossbar and only seconds more had elapsed when Walcott forced Mignolet to make the first of what proved to be a series of important saves.

Lee Cattermole, returning to the Sunderland side after a knee injury, needed less than two minutes to find his way into referee Anthony Taylor's notebook for a late challenge on Aaron Ramsey.

Walcott was making life difficult for left-back Danny Rose and Mignolet came to the rescue once again with four minutes gone after the England international ran in on goal.

But as the half wore on, the Black Cats started to make an impression and it took an important block by Jenkinson to repel Stephane Sessegnon's firmly-struck 16th-minute effort after he had escaped from Nacho Monreal and Mikel Arteta on the right.

Fletcher sent a looping header towards Szczesny's goal seconds later but as play switched swiftly to the other end, Olivier Giroud dragged a left-foot shot wide of the far post.

Mignolet threw himself to his left to turn away Ramsey's stinging 32nd-minute drive but the respite proved only temporary.

The visitors finally took the lead three minutes later when Jack Wilshere and Walcott combined to set up Cazorla on the edge of the box and he drilled a low shot past Mignolet.

Walcott came close to extending his side's lead two minutes before with a strike which drifted wide of the post but Ramsey would have done so had it not been for Mignolet's excellence in stoppage time, the keeper blocking his effort at point-blank range after he had waltzed through a static defence in pursuit of Giroud's pass.

Wilshere's 50th-minute departure after he was fouled by N'Diaye removed one threat for the home side but added Abou Diaby's physicality to the mix.

However, Sebastian Larsson, a half-time replacement for Cattermole, forced Mertesacker to head behind uncertainly from a 52nd-minute free-kick.

Giroud pushed a left-foot shot just wide of the far post with 56 minutes gone but Sunderland should have been back on terms two minutes later.

Ramsey was caught in possession on halfway to allow Sessegnon to race upfield and lay the ball into Fletcher's path.

The Scotland international looked odds-on to take his tally to the season to 11 but uncharacteristically sliced his left-foot effort wide of the post.

Cazorla almost made him pay three minutes later but sent his drive past the far post.

However, Sunderland received a boost seconds later when Jenkinson, who had been booked for a ninth-minute foul on Jack Colback, scythed Sessegnon down and received a second yellow card.

Black Cats boss Martin O'Neill went for broke with 22 minutes remaining when he sent on Danny Graham to rapturous applause, in stark contrast to the reception he received on his last appearance at the Stadium of Light as he closed in on his move from Swansea.

But Arsenal should really have extended their lead with Diaby and Cazorla going close and Walcott hitting the post after chipping an effort over the advancing Mignolet.

Mertesacker's 78th-minute blunder handed Fletcher another golden opportunity but Szczesny was equal to the task and the Poland international produced another excellent save five minutes from time to keep out the Scot's goalbound header.

Defender Titus Bramble could have snatched a points seconds later but he could not direct his close-range effort at goal and Szczesny kept out Adam Johnson's injury-time effort with another good save.