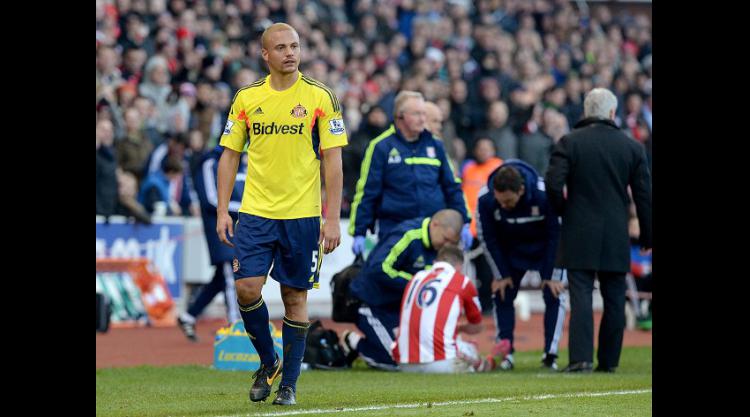 Sunderland's appeal against the red card shown to defender Wes Brown in Saturday's Barclays Premier League match at Stoke has been upheld, the Football Association has confirmed.

Announcing the news on Tuesday afternoon, the FA also revealed that Crystal Palace had been unsuccessful with their appeal against the red card Eagles midfielder Yannick Bolasie received in their top-flight game at Hull on Saturday.

"With regard to Brown, who was dismissed for serious foul play during Saturday's game at Stoke City, the claim was upheld. As a result, his three-match suspension has been withdrawn with immediate effect.

"The claim in relation to Bolasie, who was dismissed for serious foul play during his side's match at Hull City on Saturday, was unsuccessful therefore his three-match ban remains with immediate effect."

Brown was sent off in the first half of the contest at the Britannia Stadium, which Sunderland lost 2-0, for a sliding challenge on Charlie Adam.

The Black Cats man, travelling at speed when he made the one-footed tackle, won the ball and replays suggested any contact between the two players had been minimal.

Referee Kevin Friend deemed it worthy of a straight red card, a decision that left Sunderland manager Gus Poyet livid and calling for an apology from Mike Riley, the head of the Professional Game Match Officials Board.

Friend has not been given a match for the next two rounds of Premier League games.

Bolasie's straight red card was issued by referee Anthony Taylor for a challenge on Jake Livermore 12 minutes from the end of the match at the KC Stadium, which Palace won 1-0.