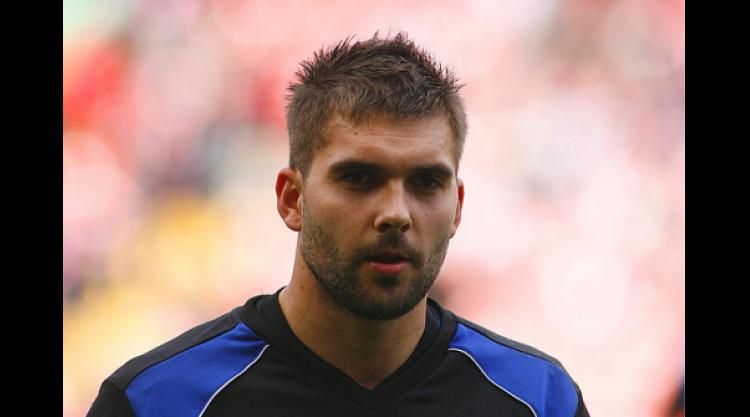 Adkins' side were looking for their 22nd successive home win, but a shocking mistake from Polish stopper Bialkowski allowed Blackpool to become the first team to take a point from St Mary's in 2011.

Bialkowski, starting his first league match in two years after regular number one Kelvin Davis was ruled out with a groin problem, looked nervous from the outset.

Southampton striker Rickie Lambert scored on the half-hour before Chris Basham headed an equaliser before half-time.

Bialkowski then gifted the visitors a second when he let Callum McManaman's weak shot dribble through his legs and into the net.

But his blushes were in part spared by Lambert, who struck in five minutes of stoppage time to leave Saints three points clear at the top.

"Bart is always outstanding in training and he will be a stronger character for what happened to him," Adkins said.

"We will support him and help him get over this mistake and the good thing is we did not lose the game.

"When we were losing and time was running out we showed great spirit and desire and Lambert got a great goal at the end."

West Ham manager Sam Allardyce admitted his second placed side had lost their cool after two players were sent off in a 3-0 defeat at Reading.

The Hammers, who have now lost back-to-back matches after their home defeat to Burnley last weekend, had defender Joey O'Brien sent off for a second yellow card after a trip on Jobi McAnuff.

Alex Pearce took advantage as he drilled in the resulting free-kick in the 66th minute and substitute Simon Church tapped home Adam Le Fondre's chip in the 80th minute before Jack Collison was dismissed for a wild challenge on Jimmy Kebe late on.

Church then nodded home Ian Harte's set-piece with four minutes left to round off the scoring.

"We lost our cool. I wouldn't really quibble about either sending-off," Hammers boss Sam Allardyce said.

"Unfortunately a loss of control by the players that I haven't seen before in my time here, particularly Joey O'Brien, cost us a result.

"We are in serious trouble now player-wise and will be struggling to get 11 out."

Third placed Cardiff, two points behind West Ham, failed to close the gap on the top two after struggling to a goalless draw at Millwall.

Middlesbrough are level on points with Cardiff after Scott McDonald's goal secured a 1-0 win over Brighton at the Riverside Stadium.

Hull moved up to fifth as a goal from former Manchester United midfielder Corry Evans earned a 1-0 win at bottom of the table Coventry.

Leeds retain the final play-off spot after Robert Snodgrass converted a stoppage time penalty to earn a 1-1 draw at Watford.

Ipswich ended a run of seven successive defeats as they came from 2-0 down to win 5-3 at Barnsley.

Marlon King's brace helped Birmingham come from behind to secure a 2-1 win over Doncaster.

Derby won 2-1 against Bristol City, while Leicester drew 1-1 with Peterborough.