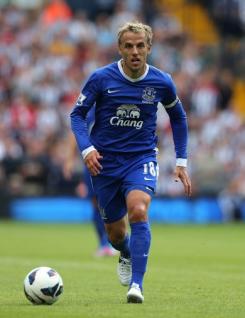 Phil Neville is a versatile player who is currently captain of Everton. Phil has played in a variety of positions since arriving at Goodison, ranging from right back to central defence and also as a defensive midfielder. He began his career with Manchester United, gaining a whole host of honours during his time at Old Trafford including six Premier League titles, three FA Cups and a Champions? League winners? medal as a member of the squad that defeated Bayern Munich to win the trophy in 1999. Phil moved down the East Lancashire Road to Goodison in August 2005 and has brought a wealth of experience as well as much needed leadership qualities to the team. He has now made over 200 first-team appearances for the Toffees and although he missed part of the 2009-10 season through injury he has returned to action and was once again an influential figure in 2010-11. Phil is a former England international and won 59 caps between 1996 and 2007.